A drinking fountain on Holborn Viaduct

I have wandered along Holborn for many years and only recently started paying attention to the odd little things that line London’s streets. Right at the very Eastern end of Holborn Viaduct, opposite the Old Bailey is a church, and embedded in its outside wall is an old drinking fountain. 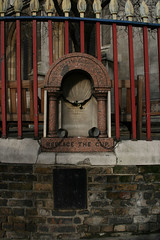 On Saturday, I had a closer look for once and read the text lining the interior of the fountain.

Not just any old drinking fountain – but indeed, the very first one ever built, and also intimately connected with the history of the Holborn Viaduct.

According to the marble surround, it was the the gift of Sam Gurney MP in 1859 – and here I found a veritable font of information.

Samuel Gurney MP was a noted philanthropist who, along with Edward Wakefield set up the Metropolitan Drinking Fountain and Cattle Trough Association in 1859 to provide free drinking water. It should be remembered that drinking water was generally not safe (weak beer was preferred by most), so the provision of fresh clean water was quite radical. 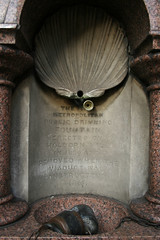 The Society was inaugurated in 1859 with the requirement “That no fountain be erected or promoted by the Association which shall not be so constructed as to ensure by filters, or other suitable means, the perfect purity and coldness of the water.”

The first fountain was built on Holborn Hill on the railings of Saint Sepulchre’s church on Snow Hill, paid for by Samuel Gurney, and opened on 21 April 1859. It was moved in 1867 when the Holborn Viaduct was built but reinstated in 1913 where it remains to this very day.

The fountain became immediately popular, used by 7,000 people a day. In the next six years 85 fountains were built, but much of the funding came directly from the association; much of that money was provided directly by Samuel Gurney, as donations were not sufficient. 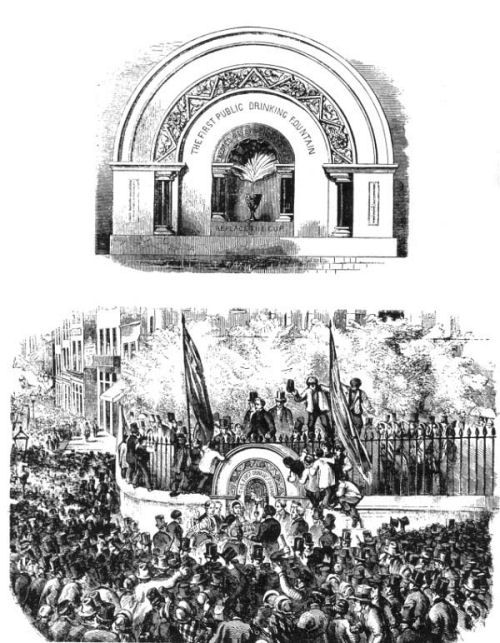 You might notice that the current drinking fountain has lost the large stone surround, which is a pity as it would have clearly indicat the importance of this bit of London history to any casual passer-by. 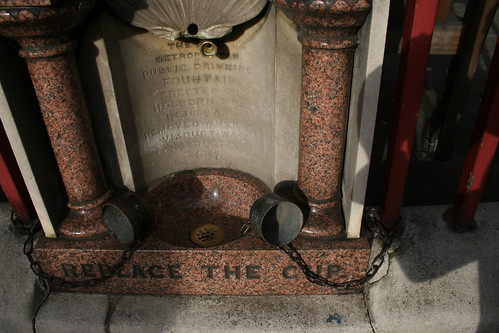 The association survives as the Drinking Fountain Association and received a National Lottery grant to build more fountains in 2000, and to restore existing ones. It now builds drinking fountains in schools, restores existing fountains and provides wells and other water projects in developing countries.

1 Pings/Trackbacks for "A drinking fountain on Holborn Viaduct"