A drawing of Parliament from the Victoria Tower made in 1860

Something political from my collection of the Illustrated London News – this time January 28th 1860 during the ongoing construction of the new Parliament.

Although most of the building as we know it today was completed by 1860, it took another decade for building work to finally stop.

A couple of interesting points raised in the article below is that the politicians are referred to as “senators”, which is a curiosity.

The other is that the drawing below (click for larger) is based on a photograph – and thanks probably to a combination of the pollution of Victorian London and the difficulties of early photography meant the photographer had to spend two weeks on-site to get one usable photo.

I suspect that might be a journalist exaggeration though, as the photographer, Mr Quarm seems to have been the clerk of works on the building site, so probably live nearby anyway.

Wouldn’t it be amazing if that photo still survived somewhere and could be found again! 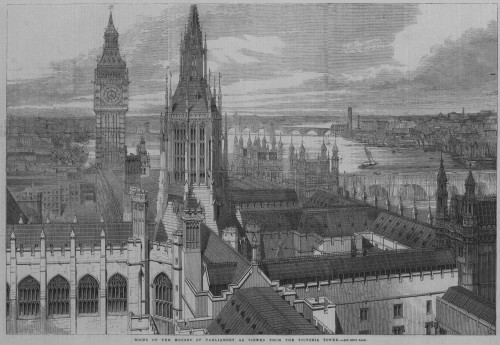 VIEW OF THE NEW PALACE OF WESTMINSTER

TAKEN FROM THE VICTORIA TOWER

We are enabled to present our reader with a View of the New Palace of Westminster, from the Victoria Tower, through the courtesy of Mr. Thomas Quarm, who possesses the only photograph yet taken of the vast pole wherein our senators meet.

We have in the view a distant peep of Somerset House and Waterloo-bridge, with the shot towers on its Lambeth side, and nearer lies the old bridge of Westminster as it appeared just prior to the driving of the piles for the new bridge.

In the centre of the view is the great octagon, or central tower, from which the various corridors seem to run like arteries in the human frame, so innumerable are they. In the distant end of the building is seen the great Clock Tower, with a small turret, or ventilating intervening shaft. At the base of the Clock Tower are seen the houses forming Palace-yard, and the dining-house near the steps leading to Bridge-street.

The long parade of the Palace looking west is in sharp perspective. The broad front before us joins the main building, with old Westminster Hall. The cluster of turrets on the right of the central hall, but in the distant angle, surmounts the princely official residence of the Speaker of the House of Commons, and the line of roof that runs to the next block of buildings covers one third of the river front.

The block just mentioned, if we may so term it, is one of two blocks which flank the centre of the river front, and is turreted like the angle of the Speaker’s residence. Thus we have more than one-half of the entire Palace seen in one glance.

The difficulty in procuring a clear view was so great that more than a fortnight elapsed ere it was accomplished, and for this purpose, the operator slept in the Victoria Tower. It should be observed that at the time this view was taken, the Victoria Tower was not quite finished, and the apparatus was put upon one of the stages; such another opportunity will not occur again, and much praise is due to Mr. Quarm for seizing the moment, for certainly nothing could give a clearer idea of the vastness of the work than this view.