Published 24 July 2012 by By Ian Mansfield Events and Tours

It’s an art thing, but quite a fun one. A red double-decker bus is doing muscular push-ups outside the Business Design Centre (map link) in Islington.

The venue has been taken over by the Czech Republic’s Olympics team and they also commissioned Czech artist, David Cerny to come up with something suitably London 2012 and fitness related.

Cerny bought the bus — which was built in 1957 — from an owner in the Netherlands, attached two huge arms, an electrical engine and a lot of wiring and suspension tools to make it into a piece of art named “London Boosted”.

It rises up and down a few times grunting and panting as it does so, then quite sensibly rests for a couple of minutes before repeating the exercise again. 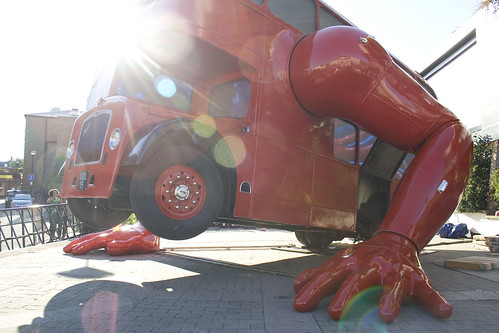 There is a video animation in the windows, which erm, meant nothing to me whatsoever. I guess they had to cover the windows to hide the mechanics inside – so put a video display thing on the blacked out windows.

The backside has also been sculpted as well, in part to allow the vehicle to be elevated, but also probably because its art. 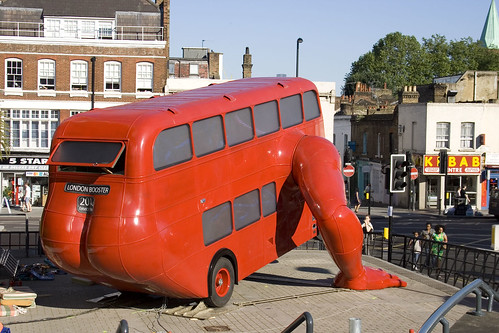 I quite like it though – it’s fun and playful and not at all difficult to work out what it means. No need for “wanky art speak” to explain it. It’s a big red bus doing push-ups. What more do you need to know?

A video I took of it yesterday evening. It will remain there, doing press-ups all the way through to the 12th August. 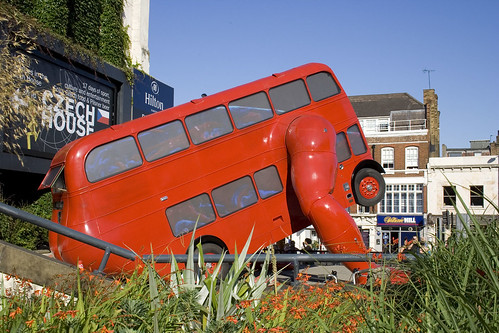