Published 5 May 2010 by History, Politics

You may recall that just a few weeks ago I attended the formal reading of the Proclamation for the Dissolution of Parliament as it was read on the steps of the Royal Exchange in the City of London. Such a proclamation is not the only one read on that location though, as the announcement of a new Monarch (and by inference, the death of the previous) is also carried out here.

There is also another more sombre proclamation that can be read out on the steps of the Exchange – and that is declaring War on another country.

As far as I can tell, the last time such a proclamation was duly proclaimed from this location was on December 8th, 1941, when the UK declared War on Japan. Thanks to increasing multilateralism in international affairs, with most countries now tending to resort to UN sanctions or so-called peace keeping measures, the chances that another such proclamation of war will be issued by the UK is now, slight.

Legally, the UK didn’t declare war on Argentina during the Falklands War – and military actions in other countries were under the authority of the United Nations, or were dubious – such as Suez.

Although obviously it is good that the UK doesn’t declare war any more, I think it would be sort of exciting to attend a formal Proclamation of War being read out.

Can we invade someone? Please?

Below is a short excerpt from the Illustrated London News of April 1854, when war was declared between the British Empire and Russia – marking the formal beginnings of The Crimean War.

The ceremony of Proclaiming War – of which, as enacted in olden times, we gave some account in our Journal of last week – was performed in the City on Friday last; although it must be acknowledged that the scene was unattended by any of those heraldic or other official accompaniments which invest the form with attraction.

About noon, Mr. Beddome, the mace-bearer, accompanied only by Mr. Hill, the gate-porter at the Mansion-house, proceeded from thence to the Royal Exchange, wearing their black robes of office, but without the mace or any other insignia. These officers were soon recognised, and followed to the steps in front of the Exchange, and were speedily surrounded by between 200 and 300 persons. The news spread in all directions, and a rush was made to the point of interest; but before many reached the spot, the brief ceremony was finished amidst loud cheers. 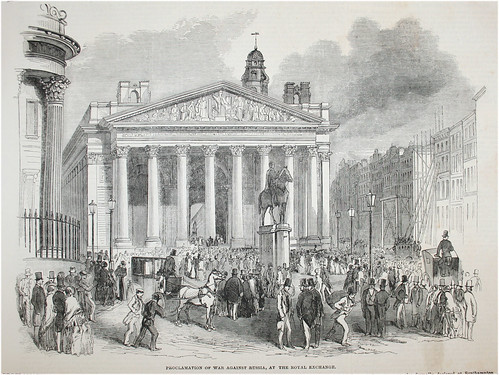