A day of humiliation and fasting

On this day, 350 years ago the entire country was engaged in a national day of fasting and prayer in repentance for the cause of the Great Fire of London.

Ordered by King Charles II, the ‘day of fasting and humiliation’ was observed, to implore God to take mercy and forgive the nation its sins.

In addition, every church held a collection to raise alms for those affected by the fire, although as the country was still recovering from plague, the amount raised for the distant city was minimal.

Fasting might not be as bad as it sounds either, as it seemed to be mainly an avoidance of meat, as his diary for the day, Samuel Pepys comments on lunch and supper of a riparian nature.

Although his contemporary, John Evelyn seemed more minded to heed the King’s order and God’s wrath, noting that “this day was indicted a Generall fast through the nation, to humble us, upon the late dreadfull Conflagration, added to the Plage & Warr, the most dismal judgements could be inflicted, & indeede but what we highly deserved for our prodigious ingratitude, burning Lusts, profane & abominable lives, under such dispensations of Gods continued favour, in restoring Church, Prince, & people from our late intestine calamities, of which we were altogether unmindfull even to astonishment”

Many a dire sermon was preached on that day, and a good example is here, demonstrating how it was evil mankind which brought upon itself the just fire and wrath of God. 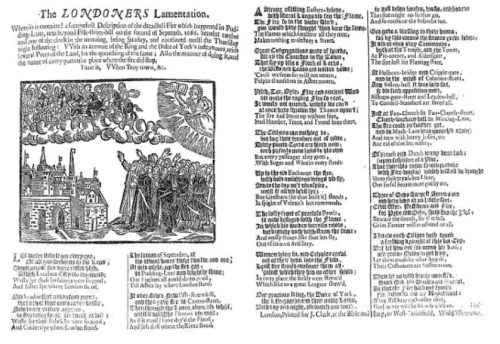 Of course, many blamed conspiracy for the fire, but religious conspiracy — it was all the fought of Catholics in a plot to destroy Protestantism in England.

As it happens, the 10th October 1666 also marked the end of the long drought which had contributed to the spread of the Great Fire. A massive downpour was reported across London.

God was pleased with mankind’s penance.