A day in the countryside and a private steam train

Published 21 May 2016 by Buckinghamshire

Most boys want a model railway, but if you are a very rich boy with a large garden, then why not build a real steam railway of your own. The invite a few thousand people and assorted steam vehicles to churn up your back lawn?

Such is the bi-annual Fawley Hill steam festival — held on the birthday of Sir William McAlpine, of construction company fame, at his estate in Buckinghamshire. 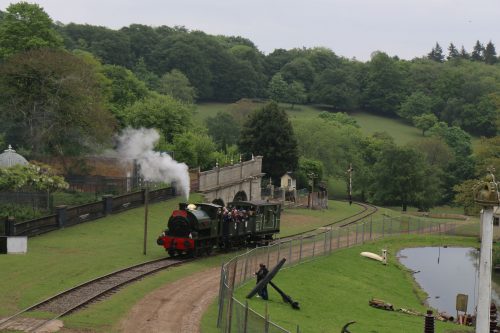 The mansion and grounds are a few miles from Henley on Thames, and a mini-bus laid on to cart visitors from one railway station to the other was, well, very mini — so a modest walk through the countryside to Fawley Hill is possible.

However, upon following the signs and arriving at what appeared to be a large gate, with a large sign announcing the fair, the officious official on the gate seemed utterly perplexed by the notion that I might want to, umm, go inside.

After some prevarication over where the main entrance might be, if this wasn’t it, to which the guy was none the wiser, he final acceded that while I couldn’t walk up the road to the fair, I could walk along a footpath in the field next to the road.

Baffling, utterly baffling, but a short walk through overgrown paths, and wrestling with a gate — hurruh — the stream fair. 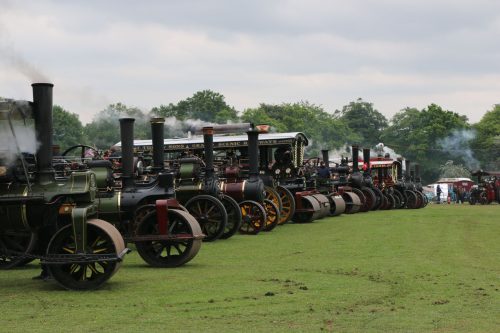 Most of the grounds were given over to the sort of steam fair that takes place up and down the country most weekends somewhere — lots of funfair rides, two old fashioned carousels, and loads upon loads of steam locomotives.

The sort that once ground down roads, and powered the agricultural revolution of the 19th century, and today maintained in varying degrees of decorative glamour.

A huge tent belting out music and beer, and a lot of smaller tents selling a mix of typical country fair goods or typical railway geek memorabilia. A curious fusion of two disparate worlds, as country folk in wellies trampled around the place almost outnumbering the “men who ride buses”.

Of course a steam fair needs planes of a non-steam variety to entertain the crowds, in this case two replica WW1 planes dog-fighting over nearby fields. 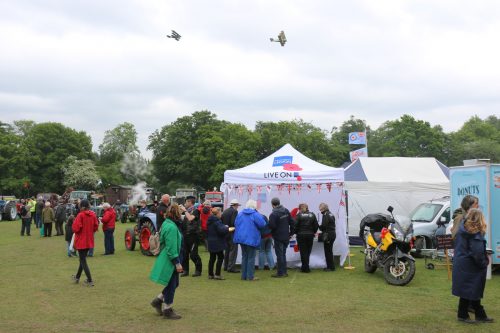 What’s difficult to convey though unless you go to these things is the smell, the sounds, the atmosphere. A hundred years ago, to be surrounded by so many machines pumping smoke into the sky would be am image of dark satanic mills.

Skip forward a century, and put them in a field, and it’s a delightful aroma of smoke, coal, oil, leather and the whiff of grease. In our sanitized office work places where the strongest smell most of us get is when someone cooks fish in the microwave oven, it’s a heady exposure to another world. 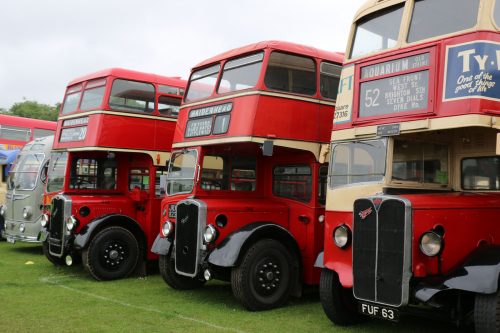 Here, I made a mistake — I spent so long looking at old buses and cars and engines, that by the time I decided to wander over to the real prize, most of the tickets had been allocated.

Sir William has been collecting railway ephemera ever since he first snapped up a soon-to-be-scrapped steam engine back when Beeching was axing most of them. Soon a railway station followed, then a signal box, some tracks and more, and eventually about a mile of railway in his back garden.

While the steam fair is something that can be anywhere, not many people can own a fully functioning steam train of their own, and as it is often closed to the public, this little line and its single stop station is probably one of the least used railways in the UK. 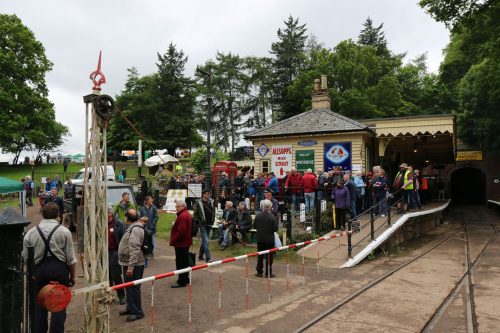 But every other year, it’s rush hour once more and people queue patiently next to the teas and cream cakes waiting for a chance to ride down, and up the steepest railway slope in the UK (possibly the world).

Elsewhere, people linger too long on the footbridge — some for photos of trains, but most to be come kids again thanks to the excitement of being surrounded by a massive plume of railway steam bellowing out of the funnel beneath them. 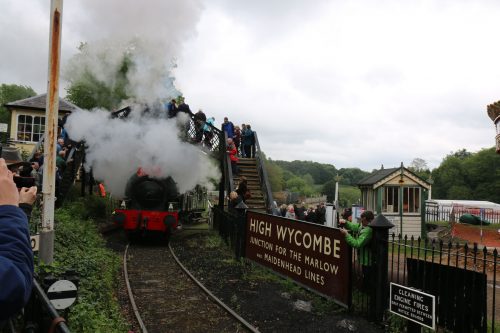 It’s not just a railway line though, a massive, indeed gargantuan collection of, frankly, clutter has been growing through the years. Everything from industrial scrap to the smallest little thing that seems to have taken the collector’s fancy.

Some donated, others collected when land was being redeveloped — sometimes by the McAlpine company. Not many would collect railway land markers, but here’s is a veritable forest of them, not to mention loads more elsewhere. 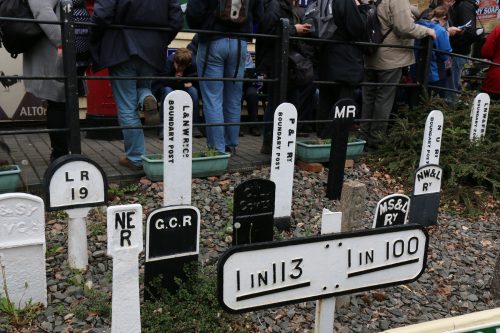 A street sign telling people how to get to Green Park or Victoria Station? A red telephone box — probably useful when you have a garden that big in an area of poor phone signal. If you have a load of iron columns from St Pancras Station in London, create your own iron henge in the garden — with camels. 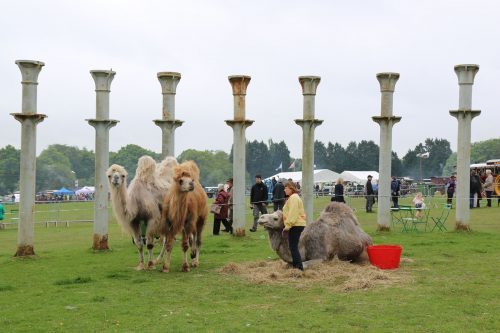 A large shed contains a museum of railway history which if anywhere else would be worth a visit in its own right. Entry was £3, via an old London Underground passometer — and while starting off inauspiciously, with lots of paintings, and old metal adverts, and a model railway, it gets better.

Goodness me, room after room piled high with railway this, that and the other. No sign of a fussy curator demanding thematic layouts or interactive displays, this is just a mass of railway “stuff” piled up high. It’s extraordinarily atmospheric as a space, and aided by the sound of the steam train outside panting its way up that steep slope.

How many other people would think to collect chairs from different railway lines, or every sort of cast iron sign you could think of. A bit of a boat here, a chunk of railway track there, some models over there, cups, saucers, bottles, labels — all from the heady days of rival railways stamping their brand logo on everything they touched.

It’s a massive collection of ephemera that is often overlooked, or if kept, put away in cupboards and rarely shown. This museum isn’t easy to visit, but it revels in the overlooked minutiae of the railways.

Outside, the mix of overcast weather and smoke from the steam engines was merging into a curious countryside smog.  A country mansion, the chugging of a steam train, cream teas, and of course, it rained.

The Fawley Hill vintage festival is open this weekend, and if you miss it, then you can either wait until 2018, or get married — you can hire the railway for a wedding. 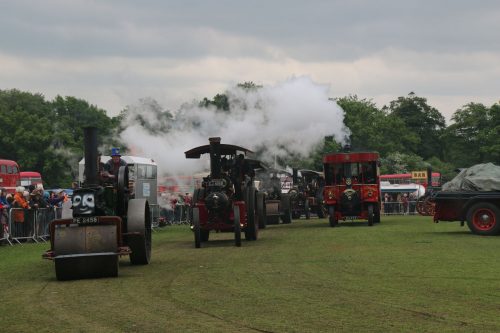 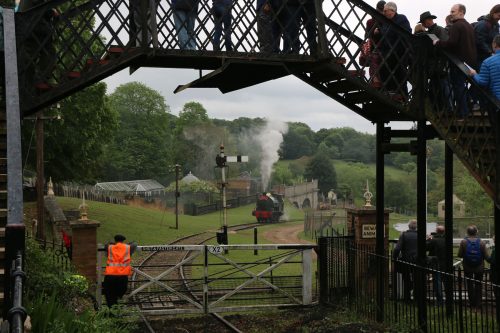 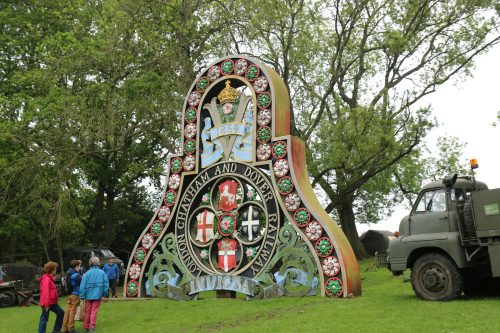 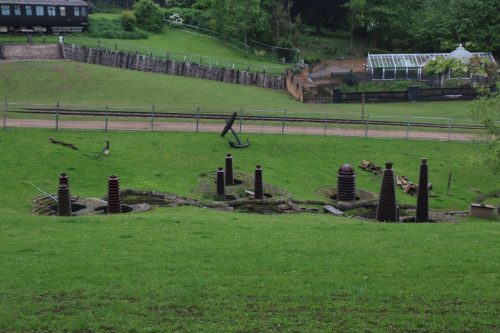