A crumbling Georgian House in Spitalfields

Published 18 June 2010 by By Ian Mansfield Events and Tours

Just off the crowded bustle of London’s Brick Lane is a small side street that conceals a historical marvel – a crumbling, derelict building within which lurks the unrestored remnants of one of London’s oldest synagogues.

The building, at 19 Princelet Street is in quite a perilous state and therefore is rarely opened to the general public – but this coming Sunday is such an opportunity.

I wandered over on Thursday for a visit.

From the outside, this looks like just another rather tired-looking building that is typical of the area, but as soon as you stick your nose in the front door, and your eyes have adjusted to the gloom, you are instantly aware that this is a very special place.

Large metal joists hold up parts of the ceiling and a stone staircase with rusting balustrade leading upstairs greet you as you sign in and explain how you found out about the place. The suggested route around is ground floor, down to the basement, then up to the first floor.

About half of the building is still off-limits as it is too fragile to let anyone stomp around – including sadly the 3rd-floor bedroom which was untouched for 10 years and is a time-capsule of a lonely recluse. 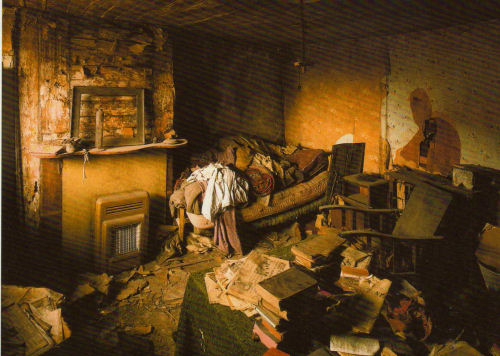 The building is dominated by the two-story high synagogue at the rear of the building – originally built over the rear garden. Anyone who has been to the delightfully crumbling Wilton’s Music Hall will instantly recognise the layout, with a stage/alter at the end and a horseshoe run of seating above the ground floor running around the walls. Unlike the bawdy antics down the road at the music hall though, this building was devoted to more ethereal matters. 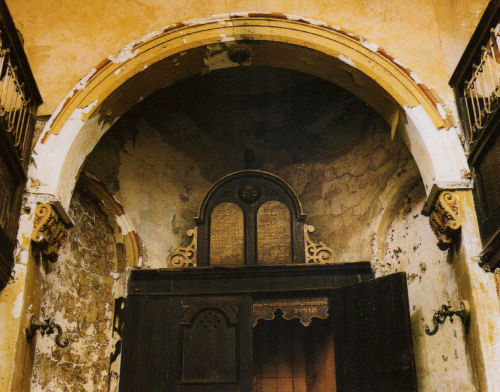 The upper level, where women and children sat away from the men, has boards running around the wall listing the donors who over the years contributed to the building, and a dirty Victorian coloured glass ceiling offers hints of dancing colours that would have once illuminate the hall.

All around the building are small A4 signs which give the reader a potted history of immigration in the area, from the early Huguenot’s who fled France, to the later Irish Catholics, then the Jews and finally the modern area’s domination by Bangladeshi families. 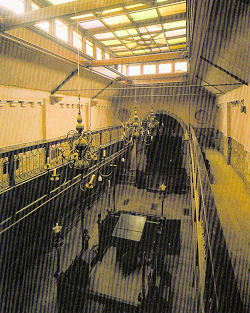 The building – being owned by a trust seeking to convert it into a museum of immigration – has quite a few displays dotted around the place showing off the various aspects of immigration in the UK.

A display with “voxpops” from people asked about immigration left your correspondent slightly despondent at the views expressed, especially when uttered by people who are themselves immigrants to the country. It seemed to me that attitudes some people expressed were about as modernised as the crumbling edifice I found myself standing in.

Heading downstairs, past the basin for men to wash their hands is a large stone flagged meeting room and the old original kitchen and if you peer through a small door, the Victorian urinals are still visible behind a pile of wood. There are lots of “piles of wood” in various places, probably waiting for the restorer’s touch to bring them back into use again.

The building is classed as being at risk by English Heritage and the current owners are trying to raise £3 million to fund the works necessary to stop it falling down, and restore it to public use again.

As mentioned above, open days are quite rare – and the next one is this Sunday, 20th June: 12 noon – 5pm, and I would highly recommend a visit. To add to the day out, the aforementioned Wilton’s Music Hall is also open on Sunday for public tours – and is only a short walk away.

Entry is free, but donations appreciated. Postcards are sold, as is a useful 50p sheet detailing the history of the building.

Photography within the building is not allowed – the images on this article are rough scans of the postcards they sell.