Often cited by concrete fans and architects as one of their top-10 buildings, this is a bus garage, but unlike any you might have seen before.

Most bus garages are, frankly, rather shabby, being usually brick walls and a steel roof lattice, but just after WW2, there was a shortage of metal, so the engineers came up with an extraordinary set of massive concrete spans.

When built in 1952, it was the largest roof span unsupported by steel girders in Europe. Since 1988 the garage has been a Grade II* listed building reflecting its importance in post-war architectural and engineering history.

And this is the Stockwell Bus Garage.

On Saturday (15 October 2016), Stockwell Bus Garage [map link] will open its doors to the public. This is the last of a series of bus garage open days to be held this year.

Thanks to the pale gray of the concrete and plenty of lighting, this is unlike any other bus garage you will ever visit, which often feel dark and forbidding. Here it is light and welcoming. A vast expanse of tarmac flooring to play with.

Run by the bus operator, Go Ahead, visitors to the Grade II listed bus garage will be able to:

Entry is free, with donations collected from the bus garage open day going to the Missing People charity. 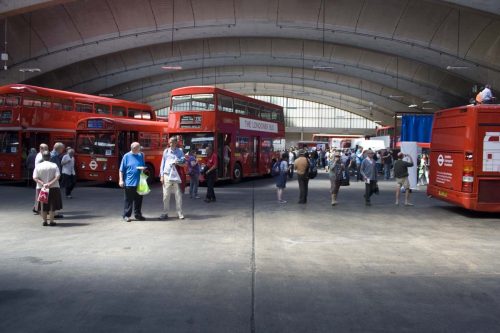 In addition, there will be events at the nearby Stockwell Tube station.

TfL Travel Ambassadors will show visitors the way and a Victorian Crossing sweeper will make sure visitors don’t get their shoes dirty.

There will be a display revealing the station history and leaflets explaining recent major projects on the Northern and Victoria lines including accessibility improvements, Night Tube, station upgrades and refurbishments at Victoria, Finsbury Park and Bank as well as the recent Art on the Underground Victoria line project, ‘Underline’.