Some years ago, the BBC commissioned a series of short films to fill gaps in their schedules, each being 10 minutes long, including trailers, about architecture.

One of them being presented by Jools Holland who took rather a fancy to the newish Canary Wharf, and now offers us a chance to remind ourselves just what an exceptionally aloof structure the original tower was before it was surrounded by even more towers. 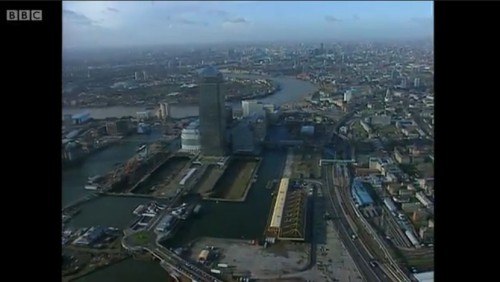 Being a celeb, he is allowed to stand right at the top of the tower, inside the pyramid, and climb out onto the pathway that runs around the top a few floors below.

There’s also a few comments about ground architecture, and it was then that I realised I had seen the film before, but was unable to find it as I had presumed that softly spoken Dan Cruickshank had presented it — as the only bit I could really remember were admiring comments about the detailing on the lamp posts.

Nope, a musician was the presenter, so much for my fallible memory.

The film has a fleeting moment to delight transport geeks, of early DLR trains pulling into Canary Wharf station. A comical comment about the symmetry of Greenwich being ruined is actually quite an interesting point about how the long distance landscape affects views across London. 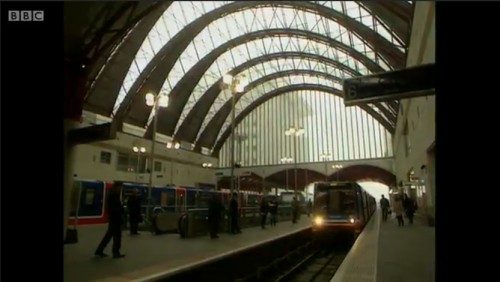 You can now also delight in nine minutes of Canary Wharf as it was in the year Ninteen Hundred and Ninty Six thanks to good old iPlayer, where the entire series has also been put online. 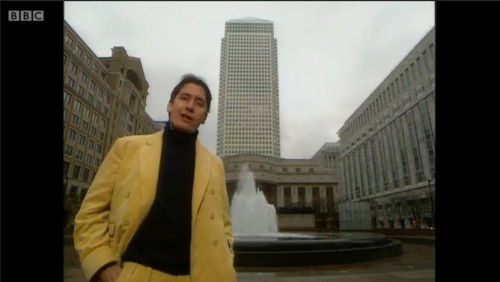