Victoria Coach Station was opened on the 10th March 1932, by London Coastal Coaches, a consortium of coach operators. The art-deco frontage is now a listed building, and is one of the most notable surviving works by Wallis, Gilbert & Partners, specialists in industrial architecture. 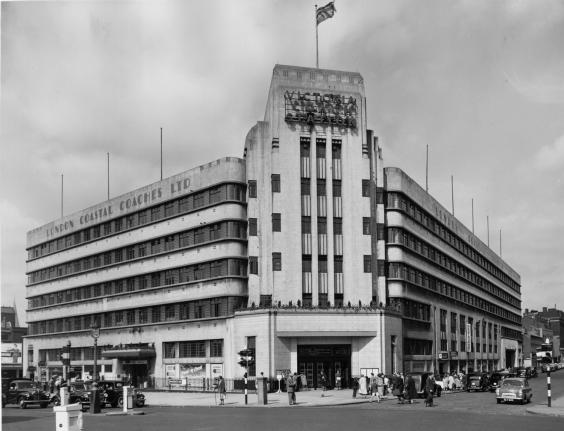 It will be as much a celebration of the building, as a look back at a time when people dressed in their Sunday Best to travel, and when coaches enabled ordinary folk to visit far-flung places for the first time. The birth of tourism by the masses, and for many, their life-changing adventures started here, at Victoria Coach Station.

This started the ball rolling, with travelling by coach increasing in popularity, and by 1930 over a dozen other national operators were using a two-acre site in Lupus Street as their London terminus. Consisting of an open yard with utilitarian structures, this was only a temporary solution and in 1930 the 1.25 acre site in Buckingham Palace Road was acquired.

Opening on 10 March 1932, the new station comprised a ground-floor booking hall, shops and buffet, and a lounge bar and 200-seat restaurant at mezzanine and first-floor levels.

Now, in its 85th year, heritage coach operators are expected to descend on the coach station for a three-day festival featuring vehicles from every decade since that grand opening. Alongside preserved vehicles dating from the late 1920s to the 1990s, there will be a number of modern day coaches to board and look around.

There will be stalls from current operators, as well as a number of competitions raising money for The Transport Benevolent Fund.

The festival is being organised by the Thames Valley & Great Western Omnibus Trust who are currently calling for heritage coach owners to attend the three-day event.