At lunchtime today, it will be 75 years to the moment when a German bomb was dropped on a South London school, killing 38 children and 6 adults.

There is still to this day some debate about whether the school was targeted by the pilot, or if he simply saw a large building in a residential area and saw an opportunity to take out something.

The raid on the 20th January 1943 was part of the German Terrorangriff, to spread terror amongst the civilian population, and although it aimed to take out industrial facilities, it was as much a propaganda weapon.

Reports at the time, and later eye-witness interviews however say that the plane flew low over the site, low enough for the schoolchildren to see the pilot — and by inference, for the pilot to have clearly seen that this large tall building was not a factory. It was also said that the pilot had ignored other more obvious targets such as a gas works and railways.

Why Heinz Schumann chose to drop his one and only 500kg bomb on the school will never be known — his own report from the raid simply noted that he targeted a large building and a block of flats.

He was himself shot down in action a few months later, on 8th November 1943.

The Sandhurst Road School Disaster from Tim Shoebridge on Vimeo.

Some reports of the time suggest that there were two flights over the school, with one using machine gun fire to kill people, but then on the second run, the bomb was dropped, hitting the school building right where the dining room was.

As it was lunchtime, 24 children and 2 teachers were killed in the dining room, with the rest being killed in the collapsed building. Roughly 60 other children were injured. 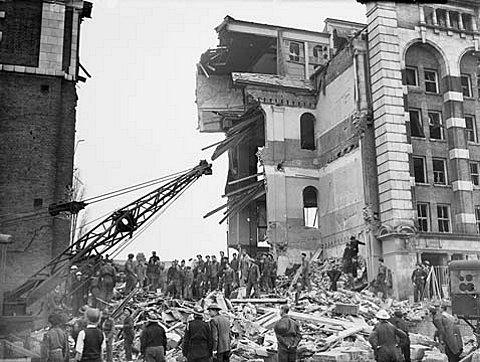 A nearby church was quickly turned into a first aid station, and rescue works carried on throughout the night. Due to the threat of more bombing raids, the rescuers had to use shaded lamps and flares, but even when these had to be turned off due to two air raid alerts, the rescue workers carried on in the dark.

Mobile canteens were set up, supplying that essential commodity at a time like this – tea and biscuits. A local baker donated enough bread and cake to feed 500 people, and hundreds were reported to be working in the area over the next few days. 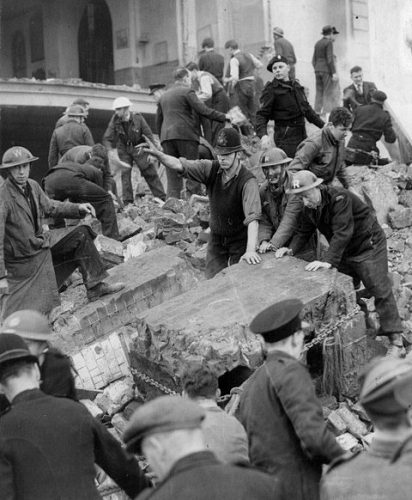 The work was carried out despite fears that other parts of the building might collapse, and the following day large cracks started to appear in some of the standing walls.

It seems from newspaper reports that it could have been a foggy day, as they note that fog that hampers bombers at night is a protective shroud during the daylight raids.

This seems to explain one of the mysteries about the raid — why there wasn’t an air raid warning, and why the barrage balloons weren’t in the air.

There was also some muted comments that those parents who resisted having their children evacuated must be paying a doubly high price on the following morning. There were calls for the evacuation policy to be brought back into effect, lest the German’s start targeting schools as a matter of policy.

The following week, around 5000 people lined the streets as thirty-one of the 39 dead children were buried in a communal grave, in Hither Green cemetery, just around the corner from the school.

Included with the children was one of the teachers, Miss Harriet Langdon, forever watching over the children.