80th anniversary of the first science-fiction show on BBC TV

Today marks the 80th anniversary of the first ever time a robot appeared on British television – indeed, probably on television anywhere in the world.

In February 1938, the Radio Times TV supplement announced that the Friday afternoon play would be “R.U.R” (Rossum’s Universal Robots) by Karel Čapek.

Audiences were primed to expect the play, as the Radio Times TV preview the previous week (28th Jan 1938) had very briefly mentioned it as “a play that should lend itself very well indeed to television from the point of view of effects”.

What they weren’t told is that this play is also the first time that the word “robot” was coined in the English language, and also the first ever science-fiction play on BBC television.

The play begins in a factory that makes artificial people, made of synthetic organic matter, called “robots.”, although they are closer to what we today would consider genetic clones – and indirectly probably presaged the Invasion of the Body Snatchers. 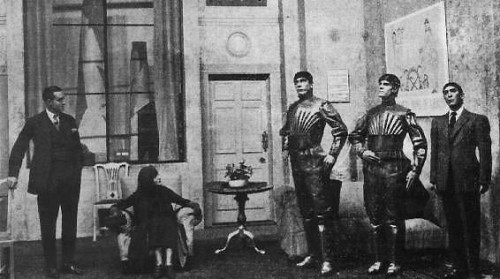 Photograph from a stage play – via Wikipedia

As is commonplace in robot societies, they seem happy to work for humans, although that changes, and a hostile robot rebellion leads to the extinction of the human race.

Having attacked the humans, the robots realise that they are dependent on the humans – as they cannot self-replicate. Just one human survives who they save as they think he might be able to save their species. It’s curiously similar to a plotline from Star Trek Voyager.

What is interesting about this 1938 TV adaptation is how the reviewer emphasized the special effects nature of the forthcoming TV show, heralding the future of science fiction on TV and film, where rather too often I find that the special effects overwhelm the plots.

You don’t need special effects in books – the imagination fills in the gaps, and it would be nice if TV/Film remembered that occasionally.

I was struck by an interview with James Cameron many years ago where he explained that the Aliens in his film of the same name are just six men in suits jumping around, with only minimal detail in the makeup. We add in the missing details, and because each of us adds in our own phobias to the package, the end effect is more personal, and more terrifying.

This to me is part of the appeal of early science-fiction on TV and B&W films – the plots are fairly laughable by modern standards, and the special effects lousy, but a society still coming to terms with the racing ahead of scientific progress, the idea of rocket ships to Mars seemed eminently sensible – and of course such planets would be ruled by autocratic leaders based on a English feudal society.

Like most television from that era, sadly no records of the BBC broadcast have survived. It was only broadcast from the Alexandra Palace transmitter, which at the time reached just 400,000 homes in North London.

Broadcast at 3:20pm on the 11th February, the programme was recorded, and didn’t have to wait long before it was repeated on telly – as it was shown again that same evening!

Having been the first to broadcast the play on television, the BBC returned slightly to the theme again later on in its most famous science-fiction creation – Dr Who.

In the Dr Who episode, Robots of Death, the villain of the story is named Taren Capel, which is a reference to Karel Čapek. Commander Uvanov’s name is a reference to Isaac Asimov, who was notably sniffy about Karel Čapek’s play, stating that the only thing worth remembering about it was that it introduced the term Robot to society.

The two were opposing antagonists in the Dr Who episode as they were in literature.