It’s the evening of 14th October 1940, and one of the worst wartime disasters of the London Underground is about to take place.

German bombers were overhead and people had taken to the shelters, including the platforms at Balham underground station. The trains would have still been running at the time, and commuters would have been stepping over people using the station for protection.

Although just 13 metres below ground, the platforms were considered deep enough to be classed as an official shelter point.

At exactly 2 minutes past 8pm, a bomb hit the road above, causing a massive crater in the ground, and fracturing a water mains below ground. The subsequent flood of water and soil into the tunnel was to kill nearly 70 people.

The exact number of dead is unclear, with reports ranging from 64 to 68 people, although the Commonwealth War Graves Commission now officially records 66 deaths.

In addition, more than 70 people were injured.

What is certain though is when the bomb struck, as the clock on the underground platform stopped at exactly 8:02pm. 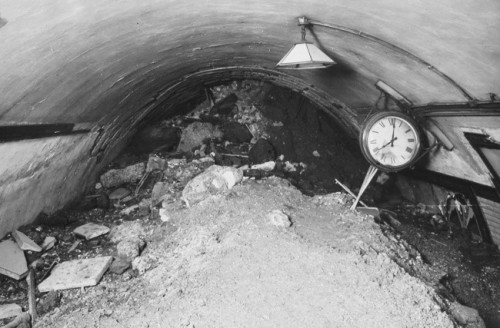 In addition to the deaths and injuries below ground, one of the more famous images of the disaster is from above ground, as a bus plunged into the freshly formed crater, causing more injuries, although of a generally minor nature. 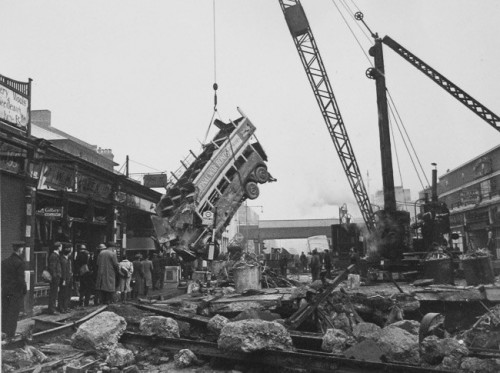 A pathe news clip of the scene the following day is here.

Down below ground though, the crater had struck right above a cross passage between the two platforms. Had that been the end of the matter, then the death toll would have been far lower. The debris filled the short corridor, but would have come to a swift end under its own weight.

However, a water mains pipe also broke, and there are few forces in nature as powerful as water for shifting vast quantities of soil.

“The water main was burst and the flood rolled down the tunnels, right up and down the line, and the thousands of refugees were plunged into darkness, water. They stood, trapped, struggling, panicking in the rising black invisible waters.” Colin Perry.

Colin was recounting how the disaster was told to him later, and there was certainly some embellishment going on. For a start, there’s no way that thousands of people could have been in the station. Other references to gas seem disputed, although a gas mains was broken. But, such is the nature of rumours and gossip.

At the time, rumour and gossip was already talking about hundreds of dead, but an inspection by Lt-Col. AHL Mount, the Chief Inspecting Officer of Railways at the Ministry of Transport the following day dismissed that as exaggerated. 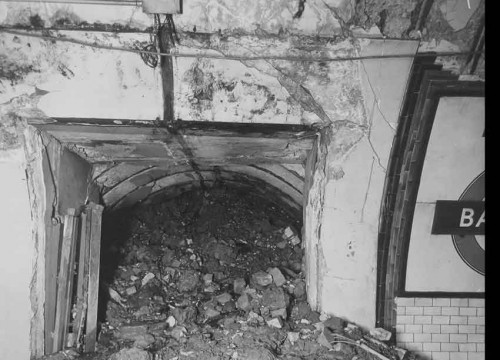 His report gives a graphic insight into the aftermath of the disaster, as the fire brigade was still pumping water out the following day, and one of the three broken water mains was draining “into the crater like a small waterfall.”

Thanks to the subsidence below ground, the crater above ground was considerably enlarged, to having a diameter of some 60-70 feet. Along with the bus, it became a powerful image of the war, and it wasn’t until after the war that photos of the devastation inside were released.

It was to take several months to clear the site, with bodies still being recovered in late December.

The line, which had been suspended between Tooting Bec and Clapham Common was reopened on the 8th January 1941, with the station reopening on the 19th January.

In 2000, a memorial plaque was placed in the entrance hall to the station in memory of those who died. In 2010 the plaque was replaced with a version removing the number of those who died, due to the uncertainty about that number. The original plaque is now in the London Transport Museum. 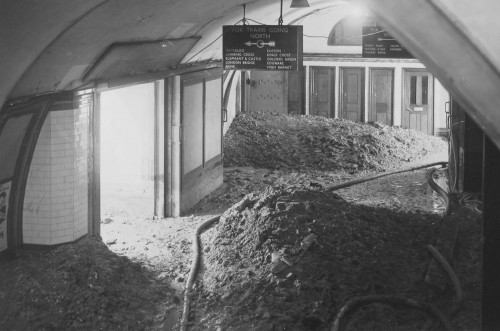