70th anniversary of an aircraft factory hidden in a tube tunnel

After 16 months of preparation during the height of the blitz, a secret aircraft components factory was completed deep underground in North London in what were unfinished tunnels for the Central Line extension. The factory was completed in March 1942, so I have missed the anniversary, but no one else seemed to mark it either, so I am still going to write about it.

The factory was operated by the electronics manufacturer, Plessey and after their Ilford factory was bombed in late 1940, they persuaded the Air Ministry and London Transport to let them use the unfinished tunnels between Leytonstone and Gants Hill as a wartime factory. The conversion of the tunnels into a factory was completed in March 1942 at a cost of £500,000, giving Plessey 300,000 sq. ft. of factory space.

Parts of the factory was actually in use before March 1942 – but the conversion was staggered over time and completed 70 years ago last month. The sort of things being assembled in the factory included wiring sets for Halifax and Lancaster bombers, wireless equipment, field telephones, and Enigma Code-breaking “Bombes” for Bletchley Park. Up to 4,000 people – mainly women – worked in the tunnels for the four years that it was in use.

Workers worked long hours, beginning at 7.30am and often working overtime for no pay. The knowledge that they were doing their bit for the war effort was enough of a compensation for many people. It must have been a very odd environment for people who were more used to working in large well lit ventilated and lit factories to suddenly be plunged into a tunnel with no daylight, limited fresh air and no smoking. The toilets were presumably at the surface, with maybe emergency chemical toilets in the tunnels – which would mirror how some shelters were designed at the time.

Access into the factory was via the three unfinished tube stations at Wanstead, Redbridge and Gant’s Hill – and two more intermediate shafts were installed to let goods and deliveries to be taken down to the submerged factory. Although the stations at Wanstead and Gant’s Hill are quite deep, the one at Redbridge is in a valley and almost comes back up to the surface at that point. In order to pile up some additional protection from bombs, soil from the construction of the deep level shelters in central London was dumped around the station to build up the depth. As the valley was caused by the River Roding, a couple of watertight doors were also installed in the tunnels around there just in case a bomb did manage to hit the location.

Although built in unfinished tube tunnels, it still had its own mini-railway to carry components along the factory – you can see the tracks in the photo above. The railway was supposed to be used just for goods deliveries, but apparently made for a useful service when VIPs visited the site.

It wasn’t just the tunnels though – the stations were used – as shown in this under conversion photo of the platforms at Redbridge station and also there were storage facilities at the surface.

After the war, the factory was removed and the tunnels converted back to their original purpose, an extension for the Central Line, and in 1947 finally opened as such. An article from the London Illustrated News, December 6th 1947 had some details about the factory – although the cut-away drawing massively exaggerated the depth at Redbridge station, which is just two flights of stairs – not a deep escalator. 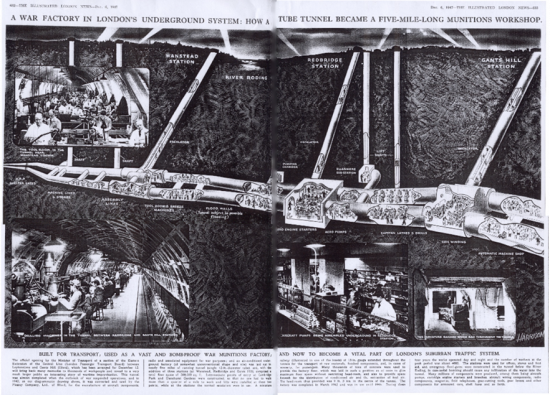 Today, the three stations are just ordinary tube stations without a single hint left of their wartime endeavours. Not even a plaque that I could see.

Although Gant’s Hill platform corridor is rightly famous, the surface building is a decaying slab in the middle of the roundabout. 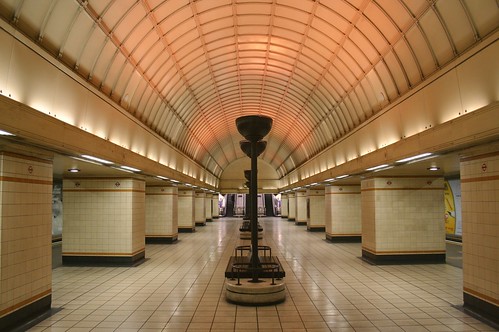 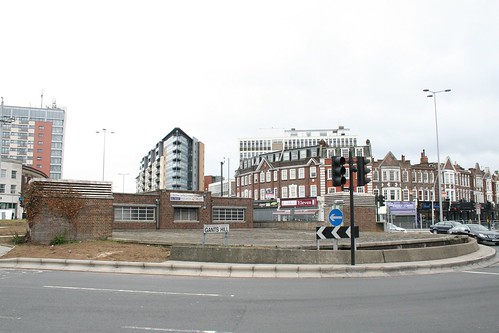 Back tracking along the Central Line at surface level, if you know where and what to look for, there is a very distinctive brick tower stuck between two houses on the main road. This is today a ventilation shaft but was originally constructed as a lift tower mainly to carry goods in and out of the factory, but also offered a short cut to work for those living close to it. 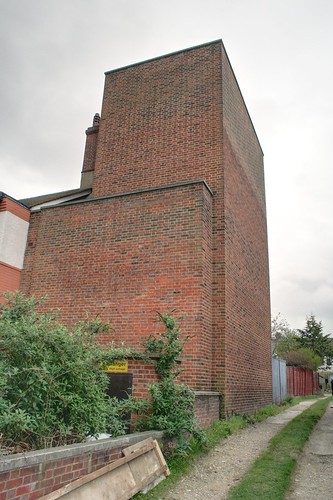 As I was photographing it, one of the neighbours came over and asked me if I worked for London Underground and could I tell them that the front needs to be cleared up. I can see her point! 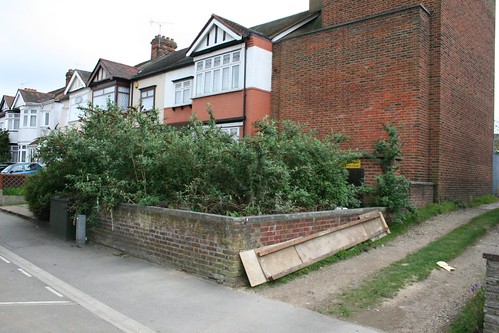 Those plants looked like Buddleja – which is generally considered to be a weed by railway companies as it has very invasive and hard to remove roots. If TfL were to clear it – maybe they could agree to let the neighbours use the space for pot plants? Topically, considering I am writing about wartime efforts – the plant is very swift at colonising rubble and was nicknamed ‘the bombsite plant‘ among people of the war-time generation.

Further along the road is Redbridge station – the one with tracks closest to the surface and which was covered over in extra soil. I presume that had it not been used as a WW2 factory, it might have been an open-air station as it is today just two flights of stairs down to the platform. 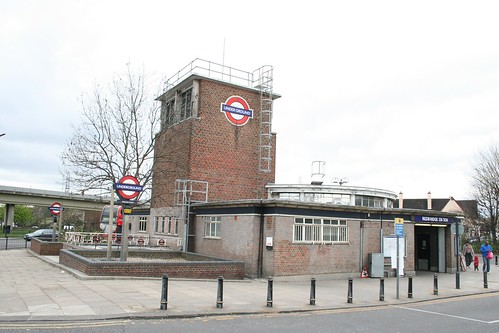 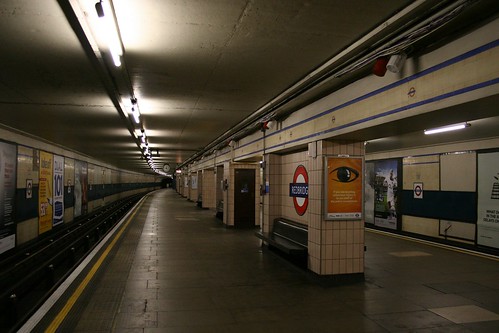 A quick trip on the train over to Wanstead station. 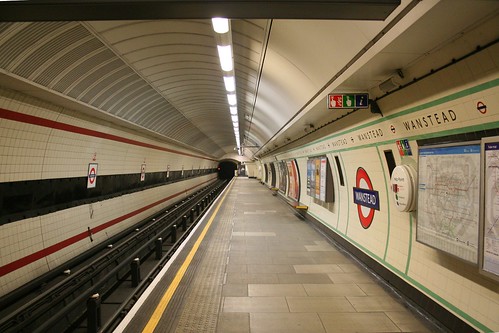 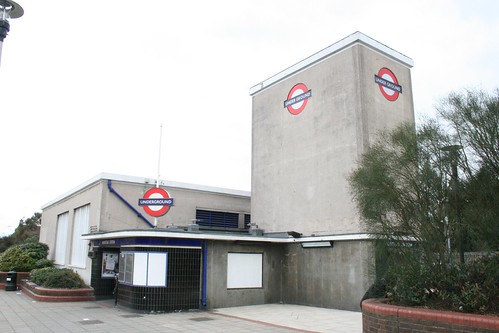 Now to find something which was only cursorily mentioned in the researches – another ventilation shaft. I knew that two shafts were constructed and that one of them was on Cambridge Park, which is a road between two stations. Some searching on Google satellite view suggested a target, and checking with the Land Registry confirmed that this plot of land is indeed owned by London Underground – along with various sub-surface features.

The octagonal brick tower peering out between two houses. 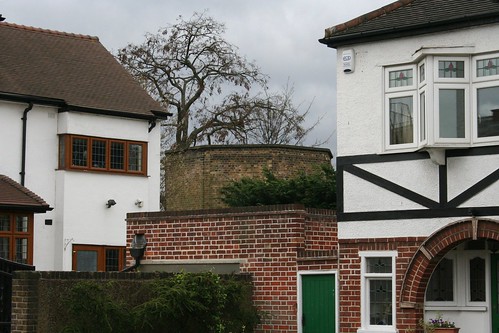 And visible from a secure and unmarked gate. The sign on the door by the tower warned of a deep shaft within. 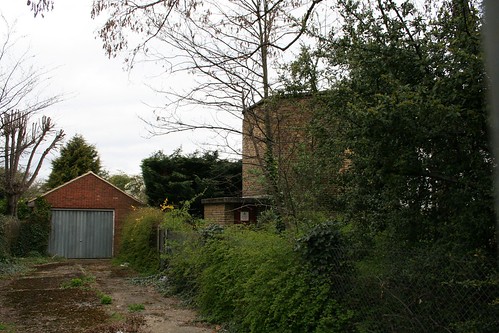 That’s all that’s visible today. This is a pity as I think it would be nice to remember the unusual and vital use this section of the Central Line was put to during the war.