50 years ago – how the Victoria line was built

Today marks the 50th anniversary of the fairly low-key opening of the Victoria line, and this is its 20 year journey from idea to finished railway.

The opening was muted as it was only one small section that was to open initially, running just between Walthamstow Central and Highbury & Islington, with the rest of the line to open in phases over the next couple of years.

The Victoria line was planned and built in a surprisingly short time frame of just 20 years, with its initial proposal being made by a Working Party set up by the British Transport Commission in 1948.

Although approved by Parliament in 1955, nothing was done, and in 1959 another report was commissioned to try and push the matter forward before the Parliamentary approval expired in 1961.

The impetus was changes in how people commuted to work, with fewer living in the centre and moving out to the suburbs. By 1959, the number of passengers arriving at Victoria mainline railway station in the morning peak was double what it had been a mere 20 years earlier, and there was no way of easily continuing the journey northwards.

The proposed line would link up with all the other London Underground lines along its route, reliving congestion in the West End and easing travel between Victoria and Euston stations.

The report also highlighted that four of the stations, Oxford Circus, Euston, Finsbury Park and Walthamstow Wood Street (later cancelled), would have cross-platform interchanges with the other lines, avoiding long tunnels and stairs common at other stations.

It was estimated that 85 million people would use the new line every year — today it carries over 200 million passengers. 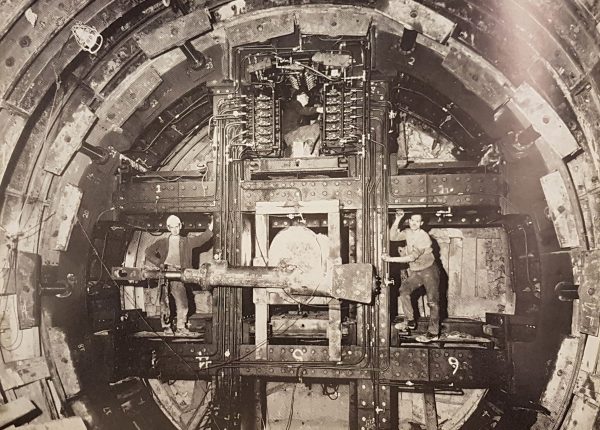 While the government was delaying the approval, London Transport got on with testing a new construction method they hoped would reduce costs.

In 1961, a mile of double-tunnels were dug out between Finsbury Park and Netherton Road in Tottenham, setting what was thought to be a new world record for tunnelling speed. The breakthrough was the use of the newly invented Kinnear Moodie “drum digger” which is the precursor to the modern tunnel boring machines.

The experimental tunnels were used for the finished railway, and the shaft down to the tunnels is still in use today, providing ventilation.

The line was to run from Walthamstow (Hoe Street) to Victoria. It had been planned to run from the mainline railway just a bit further along at Walthamstow Wood Street, but cost cutting saw that extra stop removed.

The new line was expected to open six years later, a deadline it was to just about achieve. 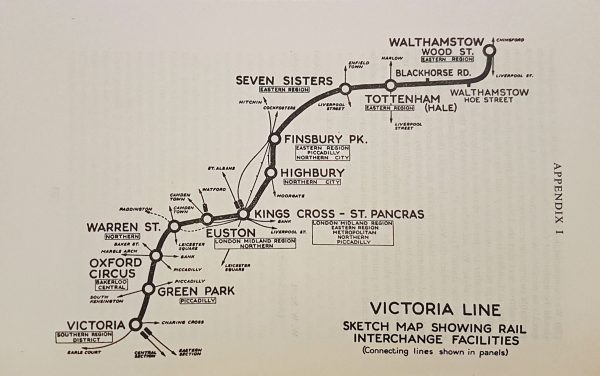 The railway had a number of names and suggested names before it became the Victoria line.

In the 1948 report, the line was simply known as “Route C”, out of several route options.

Construction started just a few weeks after approval was given by the government.

London Transport was promising some new fangled thing called CCTV, and draught less ventilation in the stations, and special fins would line the tunnels to reduce the noise of the trains.

They also promised automatic train control, with machines “interpreting a timetable of punched paper rolls”, so it wasn’t quite the age of the computer for the London Underground.

The line was approved to run from Walthamstow to Victoria. There was also a proposal for a later extension from Victoria to Fulham Broadway station on the District line, but that was dropped in favour of an extension to Brixton. 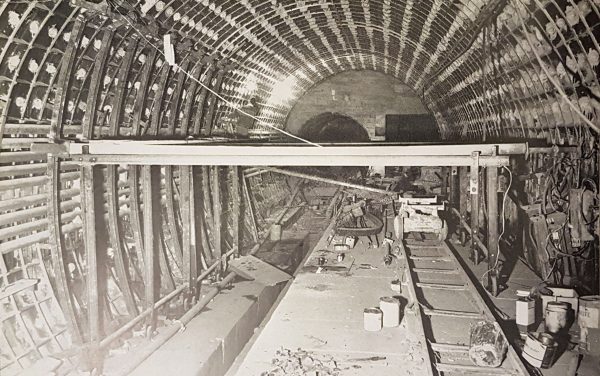 The tunnels being dug, it was time to order the trains, and a £2.25 million order for 224 carriages (30 trains) was place in March 1964 with Birmingham’s Metro-Cammel. That was to sustain enough work for 350 staff at the train manufacturer for the next two years.

Tunnels were being dug by machines for the trains, and more manually, for the stations and access services.

Deaths were narrowly averted when part of the tunnel collapsed at Green Park in August 1964 causing the hurried evacuation of seven men where were working on the exposed surface of the clay. Fortunately no one was hurt, although Green Park itself was partially sealed off in case it collapsed into the tunnels below.

A delay was nearly caused by another near-miss when in May 1965, a fire took hold in the tunnels near Green Park, causing the evacuation of 70 men working in the tunnels.

It turned out that timbers had caught fire when they were placed near to an oxy-acetylene cutting torch.

More delays occurred when two of the tunnel boring machines were “lost”, when they hit unexpected patches of sandy soil where clay had been expected and the sand had flowed into the tunnels and engulfed the machines. 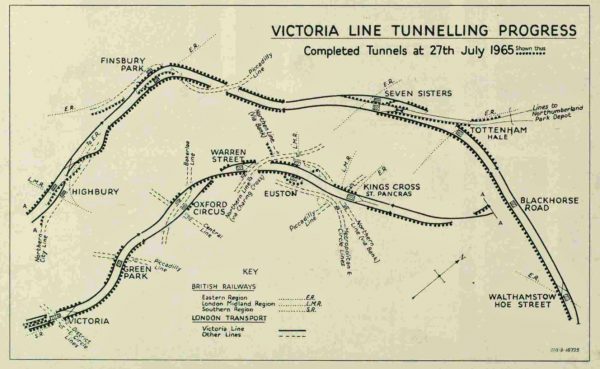 Half way through the construction, in August 1965, London Transport was able to confirm that just over half of the 25 miles of new tunnels had been dug, and work was underway of the 12 stations. However, they were behind schedule, and the line was now not expected to be fully ready until 1969.

A shortage of labour was blamed for the delays, as generous wages of £50 per week were still felt too low for the work.

Despite the delays, plans to expand the Victoria line to Brixton were approved the following month, at an additional cost of £15 million. The Brixton extension was chosen over a possible link to Fulham thanks to the plans at the time to build a motorway through South London — and the Victoria line would have linked up with car parks to be built in Brixton.

By 1968, the first of the new trains from Birmingham were arriving in London, for testing on the Central line between Woodford and Hainault

The test train was driven by Jimmy Greaves, and if that name sounds familiar to some, he was the father of the footballer, of the same name. I am sure the choice of Mr Greaves to test the trains was entirely technical and not at all motivated by the publicity opportunity. 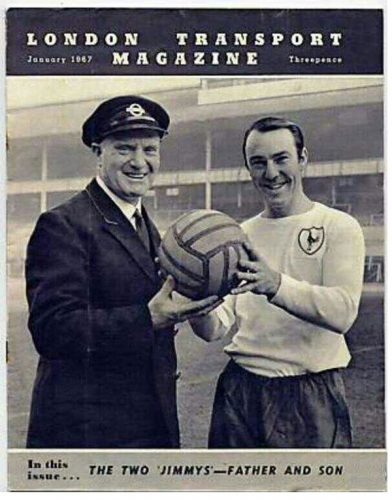 The drivers weren’t to do too badly out of the new idea of having one-man operation of the trains, earning £22 per week, which was £3 more than drivers of older trains that still needed guards.

A lot of rebuilding works were needed at the interchange stations, but the most dramatic was at Oxford Circus.

An enlarged ticket hall was needed, but the only place it could go was right underneath the road, so a huge “umbrella” was constructed over the road for the cars and buses to use, while the ground underneath was dug out by hand.

A new shaft was dug down to the Victoria tunnels from Cavendish Square behind John Lewis so that the deep level platforms could be dug out as the new ticket hall was also built. 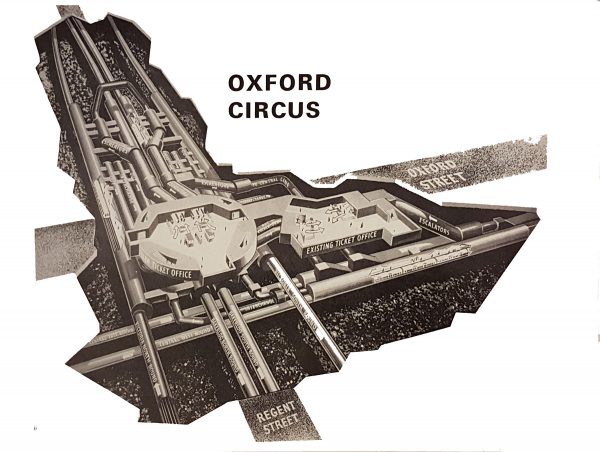 If you’ve ever suspected there’s an odd smell in the the corridor that links the old and new ticket halls, well it runs through the middle of the old ticket hall’s public toilets that were sacrificed to the new railway.

The new ticket hall opened on the 29th September 1968, even though the Victoria Line itself didn’t call there until the following March. 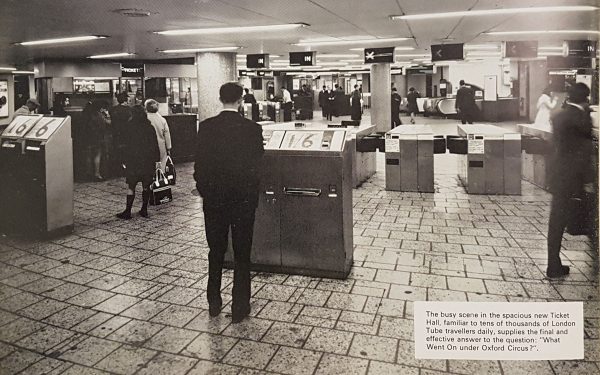 Oxford Circus was however never supposed to be an interchange for the Victoria Line. What was known as “Route 8” in the 1946 London Railway Committee Report preferred Bond Street, but this was later changed to Oxford Circus because it was felt that more passengers could be encouraged to use it outside the rush-hour peaks.

Elsewhere, all of the Victoria line stations were originally tiled in blue/grey. Each station was then decorated with tiled motifs in seating recesses to help identify the station.

Fire and damp threaten the launch

Finally though, they were ready to open one stretch of the line, until the very night before it was to open, dampness was causing problems with the new signalling system between Highbury and Walthamstow leading to urgent checks overnight.

While engineers were testing signalling deep underground, a fire started in stacks of timber next to Walthamstow station. A 3-year old Alsatian guard-dog, called Rusty, barked a warning and that alerted the security guard to call the fire brigade who dealt with it before it reached the tube station.

The risk of fire was already known though, as Tottenham Hale station had been damaged earlier in the year.

Because of the risk of delays, the opening of the Victoria line at 6:30am on 1st September 1968 was a very low-key affair.

Despite that, some 500 train geeks were up early to catch the first train, and the 28-year old Dr Hugh Pincott was the first to buy a ticket for the new line, snapping up 6 tickets for souvenirs at 1s 9d each. He evidently spotted a quick opportunity for profit though, as the man behind him in the queue offered 2s 3d to buy the very first ticket, so Mr M Tyzack ended up the proud owner of ticket number 0000.

By the end of the first day, some 20,000 people had tried out the new railway line.

Today, the Victoria line carries over 200 million passengers per year. 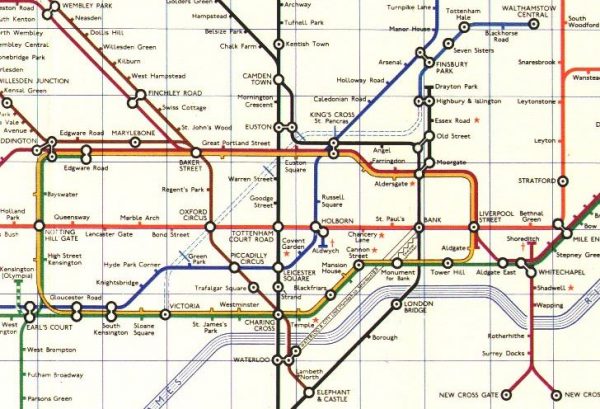 The Victoria Line, Report by the London Travel Committee, 1959

Innovation and the Rise of the Tunnelling Industry