On the August Bank Holiday, 50 years ago, a massive operation was undertaken to open a giant umbrella over what was to become Oxford Circus tube station.

It took the whole bank holiday weekend to open the umbrella, for this was no flimsy device to protect ladies hair, but something so vast that it that would put even a bankers golfing brolly to shame.

This was part of the Victoria line construction, and it was a steel structure designed to sit on top of Oxford Circus so that road traffic could drive over, while a new ticket hall was dug below.

Obviously, there had been a tube station at Oxford Circus before, serving the Bakerloo and Central Lines, but that sat on the South-Eastern side of the street. In preparation for the arrival of the Victoria Line, a new ticket hall was needed, and it was decided to put it right underneath Oxford Circus itself

In just 65 hours, they were able to seal off the road junction, and in a manner that would have a modern-day building contractor gasp in horror, erected largely by hand a cage made from 245 pieces of prefabricated steel over the road and then placed the concrete roadway on top.

Those deck plates rested on concrete piles driven down into the ground up to 73 feet deep — and had to be designed not to interfere with the subsequent ticket hall works later on.

A fascinating 3-minute video of the construction is on the BBC website, or via the BFI. Do look for the total lack of protective clothing, or hard hats, and the copious use of cigarettes while working. Oh, and a predecessor to your correspondent standing there with a camera.

A slightly shorter YouTube extract from the BFI is below, but click on the BBC link above for the full-length version.

They started at 1:30pm on the Saturday and finished the structural work at 12:15pm on the Monday. After installing road signs, traffic lights and the like, road traffic resumed at 6:30am on the Tuesday.

With the umbrella in place, they were able to excavate out the soil underneath and expose the maze of pipes and sewers that were to be diverted around the new ticket hall.

The massive Maryleone Sewer was diverted to the north of the ticket hall, partially through the basements of the buildings there.

Over the next five and a half years, the umbrella remained in place, although some of the road was removed at night to allow deliveries to the work site underneath. An extension to the umbrella eastwards also took place in the August bank holiday of 1966 to allow the connecting tunnels to be dug linking the old and new ticket halls. 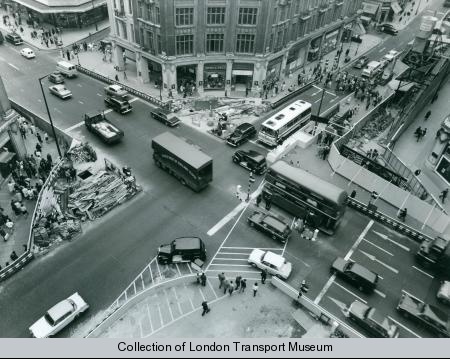 A classic Pathe news clip of the removal of the Umbrella four years later during the Easter weekend of 1968 is here — however, I have no idea what the last 2 seconds of the clip are about.

The new ticket hall opened on the 29th September 1968, even though the Victoria Line itself didn’t call there until the following March.

Incidentally, Oxford Circus was never supposed to be an interchange for the Victoria line. What was known as “Route 8” in the 1946 London Railway Committee Report preferred Bond Street, but this was later changed to Oxford Circus because it was felt that more passengers could be encouraged to use it outside the rush-hour peaks.

The choice of Oxford Circus sadly also killed off a proposal to build “Route 8C” with tunnels large enough for mainline trains, as there simply wasn’t enough space at that station to squeeze such large tunnels between the Bakerloo and Central Lines.

Had they stuck to Bond Street as the interchange, we could have had the first “Crossrail” sized service built back in the 1960s. Such are the whims of fate.