40th anniversary of New Year’s Day as a Bank Holiday

It may seem like an ancient tradition, but the idea of today being a holiday is comparatively new — in fact it is just 40 years old.

Bank Holidays are themselves fairly modern affairs, dating back to just 1871, but it wasn’t 1973 that a decision was taken to nominate the 1st January as a holiday as well. Not entirely sure why, but I suspect that as half the country was insensible on the morning anyway, it seemed sensible just to give them the day off work.

Certainly a letter to the Times in Jan 1968 suggested that absenteeism was high on the 1st Jan, and it might make sense to shift a Spring holiday to the 1st to assuage the problem.

What is formally known as the Employment (holiday extension and early retirement) bill was proposed in December 1971 by Denis Howell MP, as a private member’s bill, but it failed to secure approval.

Curiously, there then seems to be an almost total absence of any debate or commentary about the proposal to make New Year’s Day a bank holiday until it suddenly popped into existence as a Royal Proclamation in October 1973 following a government announcement earlier that month. 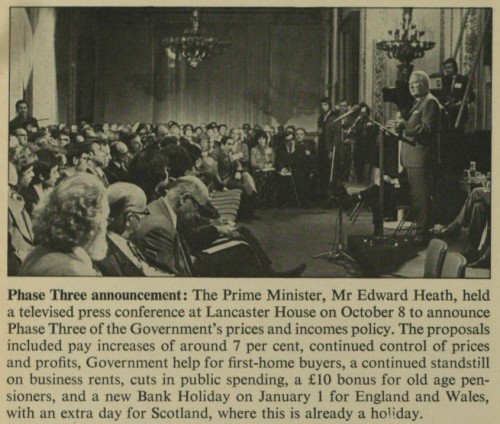 I speculate, but Jan 1st 1974 happens to also mark the introduction of the 3-day week as part of the energy crisis due to a coal miners strike, so giving everyone a day off work could have been just a way of cutting energy use in a convenient manner.

If so, it is a curious legacy of the coal miners strike than Jan 1st has become a traditional Bank Holiday — especially as there is a tradition that the first person to cross the threshold of your home on New Year’s Day should offer a lump of coal as a blessing for the year ahead.

A quirk of the existing Bank Holiday legislation is that Bank Holiday’s have to be reconfirmed every year, otherwise they don’t happen — hence the use of a Royal Proclamation.

Incidentally, quite a few laws need to be renewed every year otherwise they lapse — such as income tax, which is still technically a temporary tax and need renewing annually.

Not that everyone appreciated the notion of New Year being a Bank Holiday — as a letter to the Times by the late Richard Hornby MP on the 7th Jan 1974 bemoaned the lack of cultural venues that were open in London on the morning, but applauded the football clubs and cinemas for being open as normal.

Of course, had it not been a Bank Holiday, he should have been in work as well.