Published 17 May 2014 by Architecture

This will make some of us feel old — it has been 30 years since Prince Charles stepped into the controversial limelight and made his famous Carbuncle speech.

Of all the things that the Prince has ever said in public on matters of policy, it is probably the carbuncle that will go down in history. Not just for the catchy catchphrase used, but for the impact it had on society at large.

Of course, what few of us remember is what the “monstrous carbuncle” looked like, and frankly, I am in agreement with the Prince — it was inappropriate and not in keeping with the area.

Incidentally, if you do something that few people do, and read the speech in full, the Prince, who is often shown as being old fashioned — was not expressing distaste for modern architecture in principle.

What he actually said, in full is that he “would understand better this type of high-tech approach if you demolished the whole of Trafalgar Square and started again with a single architect responsible for the entire layout, but what is proposed is like a monstrous carbuncle on the face of a much-loved and elegant friend.”

So it was just one building in an area that wasn’t really appropriate for it that concerned him. More damningly, it just wasn’t very good architecture either. Really good modern work can sit next to classical buildings and each enhances the other for the greater good.

The National Gallery proposal was neither good nor an enhancement. It needed to be cancelled. 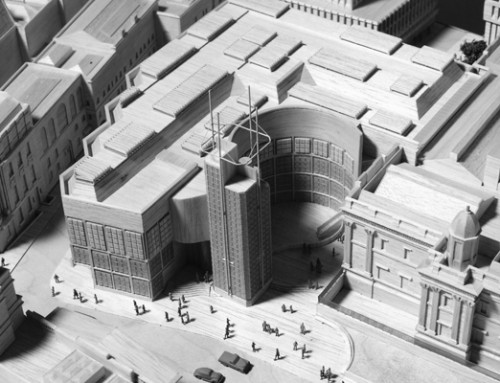 And cancelled it was, then replaced with a building that shaken from the controversy of its previous plans seemed to seek to be as inoffensive as possible, and probably now is too insignificant and too overlooked to be of much use other than a repository of additional square footage within.

The media fuss over the speech did shake up more than just this one building though, and probably set back hi-tech modern architecture a good decade before any planners would dare to approve anything so dramatic again.

The public generally sided with the Prince, not the architects.

However, while many bemoan that interfering old fool, I think that largely it did architects a favour. London and many cities held back a bit from excessively modern buildings, and in doing so, architects and structural engineers had more time to experiment on smaller scales and learn from the mistakes that were inevitable.

London narrowly avoided a similar mistake in the office-building boom of the post Big Bang years, and by being held back by public opinion, designers and planners had to play it safe.

If you ever watch the rather excellent documentary about the construction of The Gherkin, Lord Foster notes that the building is the result of 20 years of experiment and evolution. Had they tried constructing something like that in the office boom of the 1980s, it would have been a disaster. Today though, it is as much loved as any building can be.

Now architects know how to build strikingly wonderful modern buildings that work with the environment, and appeal to the general public. Some mistakes will still be made, as architects always push the limits of what can be done.

However, Prince Charles, inadvertently ensured that the buildings going up now are orders of magnitude better than they might otherwise be, and preserved a London skyline that lets these modern buildings rise up and stand out.

And that, by accident, has been a good thing for London.

So, hurrah for the carbuncle!