Today marks the 30th anniversary of the banning of smoking in London’s tube trains. Not a total ban on the entire underground, just inside the trains, a decision which was to have tragic consequences just a few years later.

It’s quite odd to think that just 30 years ago, there were designated smoking carriages on the tube trains, but on the 9th July 1984, smoking was banned on all carriages and the now-familiar “no smoking” roundel become a common sight.

It was not however the first time that smoking had been banned on the London Underground.

In fact, when the London Underground first opened, smoking was already banned.

It wasn’t the only railway in the UK that banned smoking, but when mainline railways were forced to offer smoking compartments in 1868, the Metropolitan Railway successfully argued[4]  that as a short service with regular stops, special carriages were impractical for it.

However, the smoke-free underground — at least, smoke-free within the carriages if not the tunnels — was not to last.

In January 1868 Viscount Ranelagh pleaded guilty to smoking in an empty carriage between (todays) Barbican and Farringdon. He claimed to plead guilty to speed the court case, but argued that the law should not have applied.

It was also confusing as to which trains banned smoking and which didn’t as part of the Met sometimes shared services with mainline railways. It seemed that the exemption applied to the Metropolitan Railway was an accident, and shouldn’t have been added as the vote actually went against the motion. [1]

But smokers were increasing in number and increasingly ignoring the ban on their habit.

Still, in 1874, Henry Sheridan MP wrote[1] in support of overturning the exemption on the underground that “Medical men and others assets that smoking would counteract the effect of the sulphurous vapours which have been so much complained of,”

So one view was that the smoke from steam trains was so bad, that consuming even more smoke would be good for you!

The exemption was eventually lifted in the 1870s, and smokers were finally allowed to (officially) smoke inside the train carriages.

Over the next century or so, smoking would spread from a few carriages to many, and then eventually to almost all carriages on the underground. Two carriages on each train held out as smoke-free locations, but relegated to the far ends of the trains.

In fact, so commonplace was smoking, that in 1932, there was even an exhibition of tobacco products, on the Underground, and later vending machines would sell them direct to the public on platforms.

Not to mention, the odd advert for cigarettes inside the carriages themselves — if you could see them through the smog. 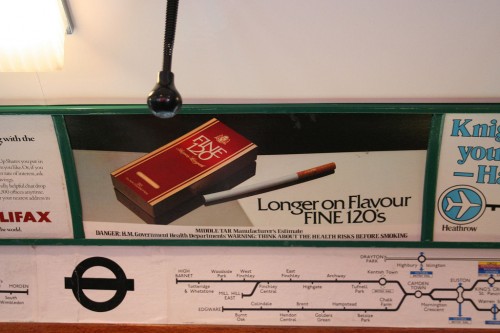 Yet, the impetus for a ban had also been building up. In the 1960s, just two carriages were designated as non-smoking, the front and rear. By the 1970s, the situation had swapped around.

Anti-smoking pressure had been building for some years, and February 1984 saw the first annual No Smoking Day. In March, a damning report uncovered the efforts of the smoking industry to conceal the heath damage from smoking.

The general state of the Underground trains with discarded cigarette butts filling the cracks in between wooden floors was also raising concerns.

In May, the London Transport Passenger Committee and the Evening Standard newspaper launch a campaign to get all of London’s transport made smoke-free.

It was however a fire at Oxford Circus tube station, possibly caused by a
cigarette, that was the main trigger for the smoking ban, along with the not inconsiderable benefit of reducing overcrowding in the non-smoking carriages on the trains.

So a ban on smoking inside the trains came into effect on the 9th July 1984.

Not that everyone agreed at the time.

Note the lady at the end who says: “I’m not going to die for a cigarette for London Transport’s sake”.

The day after the ban on smoking inside tube carriages was introduced, the Times reported seeing just one addict flouting the new rules, but there seemed to have been a noticeable increase in peppermint consumption, [5], while other newspapers treated it to the daily comic.

However, the decision to let people step out of a train and light up on the platforms was to have tragic consequences.

Although a complete ban on underground platforms was introduced in February 1985, it did not apply to above-ground platforms, and frankly was not widely obeyed below ground either.

Until the Kings Cross fire in 1987, where 31 people did die because someone wasn’t willing to wait a minute or two before lighting up outside the station.

Although London Underground’s lack of maintenance took the bulk of the blame, that passengers were routinely flouting the smoking ban was itself a not insignificant factor.

London Underground announced an immediate clampdown on smoking and for clarity simply said that it was banned on the entire network, with no exemptions.

Vast amounts of money were also diverted from other upgrades to improve safety on the Underground and tidy up the ramshackle approach to station usage that was prevalent at the time.

Yet, it was also that fire that so massively shocked people’s awareness of the issues and turned smoking on the tube from an overlooked issue that might get a person a fine from an annoying jobsworth into a social faux-pas that would be deeply frowned upon today.

As an aside, in 2001, it was widely reported that spending 20 minutes on the underground was the equivalent of smoking a cigarette in terms of harmful pollutants breathed in. Of course, it was journalist hybole.

And finally, it seems that while London Underground had banned smoking entirely in 1987, their signs were not compliant with the ban on smoking indoors that applied to the rest of the country in 2007. [7]

All the “No Smoking” signs had to be replaced.

As The Times noted, not the Tube’s fault, obviously, but exactly which bit of “No Smoking” were people thought not to understand?