200th anniversary of the destruction of Custom House

On the morning of the 12th February 1814, an explosion shook London that was so vast that the mighty Custom House in the City was utterly destroyed, and documents from the building were recovered from as far away as Hackney Marshes.

The ill-fated building was itself a replacement for a Christopher Wren designed building of 1668 that burnt down nearly 300 years ago in 1715.

A new, larger structure was built to the designs of Thomas Ripley, “Master-Carpenter” to the board of Customs. However, by the 1800s, it was already seen as being inadequate for purpose, thanks to the growth of the London Docks and the increase in tax collection during the Napoleonic Wars. 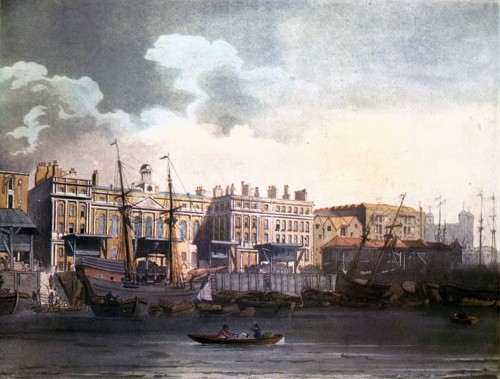 So, in 1813, a new Custom House was being constructed next door, which is, with modifications still there to this day.

Whatever their plans for the old building may have been, they were eliminated as thoroughly as the building itself, when at around quarter past six in the morning of the 12th February 1814, a small fire broke out in the old building.

The fire is thought to have actually started the night before, but been simply smouldering, and from a report in The Times a few days later I lay a guess that a flashover took place.

A porter was going around opening doors and preparing the building for the days tax collecting, and the smouldering fire could have been given sudden life by the influx of air, and woosh — a huge flame erupted.

The porter ran to summon staff and a Colonel who slept in the building, and was later badly burnt while trying to escape.

An orphan girl who was being brought up by the Colonel’s wife died in the subsequent conflagration.

However, it was the explosion that was to utterly devastate the building. 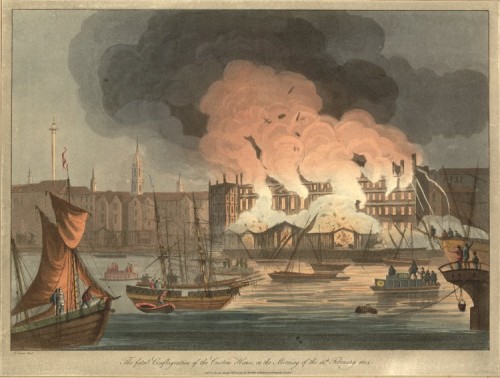 Not unusually for government buildings of the type, there was a store of gunpowder in the building.

A later report by the firemen said that ordinarily they could have contained the fire as it was, but rumours of the gunpowder caused them to move back from the fire and leave it to burn out of control, while they directed their efforts at saving the nearby buildings.

Later, the staff of nearby buildings were to be commended for preventing the fire from spreading further. As were the staff of the Port of London, and an early fire fighting boat.

However, at around half past nine in the morning, the inevitable occurred, and a massive explosion that was heard for several miles deafened the Pool of London. There are conflicting accounts about how much gunpowder was involved, from a few pounds for use by the volunteer militia to several barrels worth.

The shock from the explosion was felt at the Royal Exchange, and The Morning Chronicle reported that it was heard up to 4 miles away. All the windows in buildings up to Cannon Street were shattered.

The fire, now totally out of control raged down Beer-Street to Water-Lane and many men who had been damping down their buildings to stop them catching fire in the heat were severely scorched.

By One O’Clock, the entire wharf was an utter ruin.

Such a spectacle drew onlookers, and it was said that by mid afternoon, thousands of people had come to see the fire and were lining the south bank of the Thames, even at night as the embers still glowed brightly.

The Morning Post wrote that by late at night, the fire was finally subdued.

But a curiosity was noted…

Several days earlier, in Southampton, a Mr Miles had died. He was the administrator for the contract for the building of the new Custom House that was just starting construction next to its now ruined predecessor.

His funeral took place on the same morning as the fire, and The Morning Post couldn’t help but note that as his body was consigned to dust, the old Custom House was being consigned to ashes.

The ashes forming, as it were, a funeral pile to his remains!