Two hundred years ago the first public gas supply was built in London, initially to light the streets, but also to supply some local houses.

The Gas Light and Coke Company was actually founded a year earlier by Royal Charter signed by King George III, and the company can reasonably directly trace its history all the way through to the modern day British Gas.

Although founded in April 1812, it’s difficult to pin down exactly when they started, but it was around about nowish in 1813.

For example, the The Morning Post of 25th August noted that two roads leading to the Houses of Parliament were to be lit with gas supplied by the company. The same paper, on the 15th October noted that the company was putting up street lights and needed just one lamp where three had been needed in the past.

So sometime around August to October 1813. 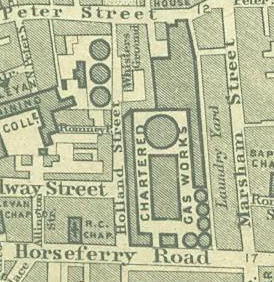 The first gas works was built at Providence Court, Great Peter Street, which wasn’t an ideal location as they produced gas by extracting it from coal, and that coal had to be transferred from river barges to the gas works by horse and cart, and waste removed the same way.

In 1817 this problem was partially solved by the laying of a pipe for effluent down to the river. The site was rebuilt in 1848 and a wharf was leased in Millbank for coal delivery. In 1853 the site was further enlarged.

Of course, it wasn’t long before things went occasionally… bang!

As soon as the 28th October 1813, it was reported that the inhabitants of Westminster were thrown into confusion as an explosion at the gas plant “blew the premises to atoms”. The cause of the explosion? A pipe had burst and a workman lit a candle to get a better look.

With the opening of Beckton in 1870 and the amalgamation of several other London companies by GLCC together with the reorganisation of the mains and distribution system, Westminster was first reduced to peak load only status and then finally closed altogether in 1875.

In 1883 the site was cleared and two large gas holders were built on it. You can see them in the 1 o’clock position in this photo.

Now, that those gas holders were be really significant — for they were to later play an important role in the Falklands and First Gulf War.

In 1937, those gasometers were demolished, leaving two very large round holes in the ground. In late 1940, the two holes were converted into heavily reinforced underground bunkers, and replaced the unpopular Paddock as the new reserve Cabinet War Rooms.

Although its function as a military bunker varied over the years, it was still a secret government facility, and remained in use as a command centre until the mid 1990s.

Above the bunkers stood the Department of the Environment building, known as the the three ugly sisters, until their demolition in 2003. As part of the contract, the old gas holders were also destroyed

200 years later, the site of London’s first public gas works and then a cold war bunker is now the Home Office building.