This was the London Beer Flood, and today is its 200th anniversary.

To understand what happened, it helps to step back a bit. London was full of breweries at the time, yet there was a bit of a competition between brewers as to who could build the largest vats to hold huge quantities of beer.

Some were so huge that the brewers staged publicity stunts such as holding dinners inside them[1]. One was so large that 200 people could sit in comfort at the bottom — before they were filled with beer of course

The fairly obvious, in hindsight, downside is that if a beer vat broke, then the larger the vat, then the greater the loss of beer.

So it came to pass that just off  Tottenham Court Road, the Meux and Company Brewery constructed a vast barrel, capable of holding just over a million pints of beer. It wasn’t their largest, but it was ill-fated.

The Times report of the “dreadful accident” described it as “one of the most melancholy accidents we ever remember”[2].

According to the report, the beer flood swept down New Street, George Street and several others in the vicinity. Two houses in New Street next to the brewery were utterly destroyed by the flood. The backs of a number of other houses were also swept away by the force of the torrent of beer.

It wasn’t just the force of the fluid that caused so much damage, but the growing amount of debris from the damaged brewery, and subsequently the demolished buildings. These piled up, often in cellars and made rescuing trapped people even more difficult.

People in the cellars climbed up on furniture to try and escape the deluge[3].

The scene of the devastation was however unnaturally silent — on purpose, as the growing crowds were exhorted to be quiet so that rescuers could put their ears to the ground to listen for people crying out for help. 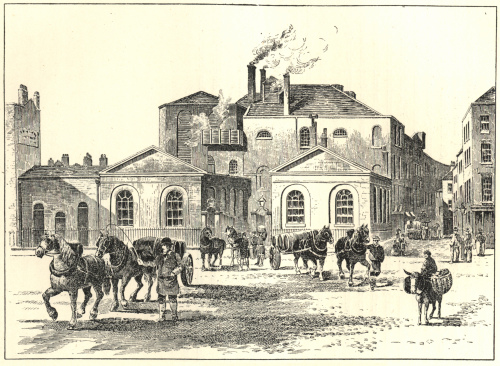 Contrary to lurid news reports of the time that many dozens of people had died, the coroner’s inquest[4] a few days later named eight people as confirmed as dead.

Five other people were in Middlesex Hospital, and recovered from their injuries. John Crick, Patrick Murphy, Mary Banfield and two children[5]. Overall, considering the scale of the devastation, the loss of life and serious injury was minimal, thanks in part to most of the local residents being at work at the time.

The inquest also gives some insight into what had caused the calamity.

The vat in question stood some 22 feet in height, and at the time of the disaster was about 8 years old, and had been kept nearly filled to the top for its entire working life.

According to a storehouse clerk, George Crick, at about 4:30pm on the afternoon of the flood, one of the large iron hoops on the vat burst and fell off. At the time they weren’t too concerned, as this was not an uncommon occurrence in beer vats, but a note was written to be sent to the builder to attend and repair the vat. The vat still had 29 hoops remaining which was thought to be sufficient.

It was an hour later, at about 5:30pm that the vat burst.

The clerk was in a room next to the vat when this happened, giving a rare eyewitness account of the events within the brewery. Upon hearing the explosion, he ran next door, which was already knee-deep in beer. One side of the building was in ruins and the roof had collapsed.

When the vat burst, the pressure was so great that it stove several hogsheads of porter, and also knocked out the cork of another vat almost as large as the original — draining that as well.

It was about an hour after the explosion that workers in the brewery trying to stem the flood realised how devastating it had been as the body of a dead woman was seen floating in the sea of beer past the brewery.

The coroner’s jury returned a verdict of “Died by Casually, Accidentally, and by Misfortune”.

However, some reports suggested that the vat was decaying, and lacked sufficient vents for the fermenting contents, causing a pressure build up that could have been prevented[6].

There are a number of myths that have emerged about the flood, such as that several people died from trying to drink the beer as it washed down the streets. As it happens, a person did die from drinking too much beer on the day of the beer flood[7] — but he was in a pub a long way away, in Melksham. Maybe that is the source of the myth?

Another myth is that that the crush of onlookers to see one of those who died lead to more deaths as the floor of the room collapsed under their weight, but there’s no contemporary report of that having happened.

In fact, the aftermath of the disaster seems to have been dealt with professionally, with labourers working to clear up the mess and others fund raising to rehouse the homeless, who were mostly Irish immigrants. 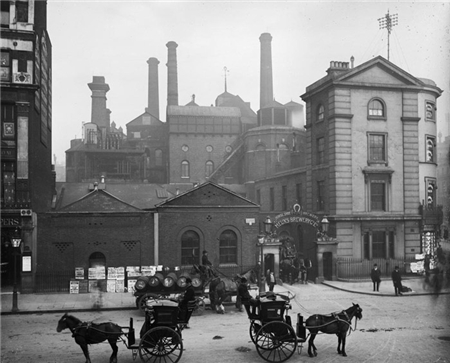 The brewery was eventually taken to court over the accident, but the disaster was ruled to be an Act of God by the judge and jury, leaving no one responsible, although the brewer was fined £20,000 for negligence.

They were able to recover some of the fine though, as an act of Parliament offset the taxable duty they had paid on the lost beer, saving them some £7,250, and sparing them near certain bankruptcy.

The brewery was demolished in 1922, and in 1927, the Dominion Theatre built on part of the site. It’s still there.

It is a possible irony that the disaster took place in St Giles, which was also immortalized by Hogarth in his 1751 print lauding the pint — Beer Street.