It’s 8 o’clock in the morning, and workers are hurrying along Holborn to their offices and shops, when a mighty explosion ripped up the road.

One pedestrian was flung, in the air, a horse was killed, a taxi cab was over-turned and a number of manholes exploded. Half a mile of Holborn saw its road torn up by the subterranean explosion. 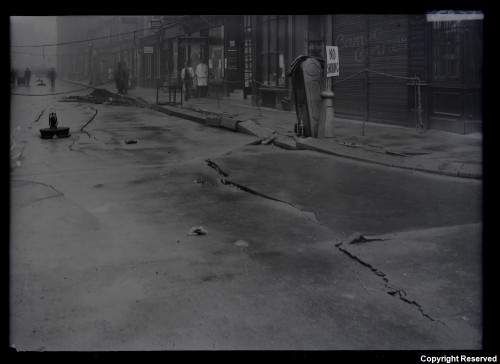 An eyewitness told the APA new agency that a worker had been seen to descend into a manhole to connect a blower with an electric switch, leaving his mate above the ground. A few minutes later a sheet of flame rushed up.

The man working in the manhole, Percy Thrower was killed and several post office workmen were seen lying in the ruins of the manhole which was now ablaze.

Today marks the 85th anniversary of the Holborn Gas Explosion. 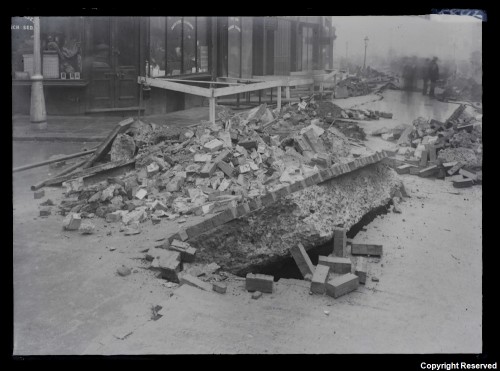 A meeting held by the Holborn Borough Council a couple of days later reported that the Gas Light and Coke Company was carrying out the works to dig up the street. The main topic of the debate though was less about how and why the explosion happened, than on who would pick up the bill for the repairs.

The Borough Surveyor said that High Holborn between Southampton Row and St Gile’s Circus was affected by the explosion. He added that “very considerable damage has been done to all sewers, mains and cables in the road,” One building was now so badly damaged that it was deemed to dangerous to go in, while others were being inspected.

Around 100 families were made homeless over Christmas, and staff working in a local hospital had to serve cold food as the use of fires were banned.

An investigation later found that four days before the explosion, repairs had been carried out at 216 Shaftesbury Avenue, and workers had noticed then that a 4-inch mains was fractured, and had started repairs.

It was felt possible that the escaping gas had percolated into the nearby building and then along Holborn by means of the service tunnels that run under the street. However, while the gas may have been the cause of the explosion, it only got to where it did thanks to the remains of the original pneumatic post office railway running deep under Holborn.

The problem being attributed to the Post Office being the lack of regular ventilation to prevent the build up of gases in the tunnels. Whether the gas came from the earlier leak, or had built up over time was largely moot — it should have been ventilated away.

It’s thought that the specific incident that caused the explosion was when the worker in the tunnel was looking for an electric plug, and using his cigarette lighter to see what he was doing — with terrible results. 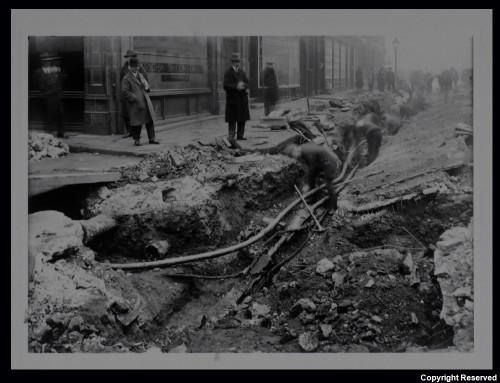 During later repairs to Holborn, the old post office railway was replaced with a 5-inch mains embedded in concrete to carry cables, and then the surface repaired. The repairs took several months, as it was noted there was too much to do in too small a working space for it to be hurried.

A “Holborn Explosion Claims Committee” was later set up to handle damages compensation.

To this day, explosions can occur in underground conduits. Not necessarily caused by gas leaks from the mains supply, but it can be due to a build up of natural gasses leaching out of the ground.

Construction workers working in tunnels — or building them — have to carry oxygen rebreathers when on site just in case there is a methane build up where they are working.

Tunnels under the streets still need to be ventilated, and inspected.

Otherwise, another explosion will take place.