It’s the ebb of the evening rush hour when engineers carrying out planned work on the National Grid’s electricity network report a problem with one of the transformers at a substation. Within minutes most of South London is plunged into darkness, mainline train stations close, and over half the London Underground shuts down.

Not a dystopian warning about the future — it happened ten years ago on the evening of the 28th August 2003. It was the largest blackout in South East England since the Great Storm of 1987, affecting an estimated 500,000 people.

Engineers were undertaking what was supposed to be routine maintenance on the link between Wimbledon and New Cross at 6:11pm, when a substation out in Kent, at Hurst started bleeping in distress.

As was routine in such situations, the National Grid and EDF Energy started switching operations to isolate the affected transformer.

At 6:20pm, as they switched supplies, and unexpectedly some automatic protection equipment on that second line triggered — and cut the electricity off. A total of 724 megawatts of supplies were lost, amounting to around 20% of total London supplies at that time.

Imagine being the person who flicked that switch, oh so routine, very normal, nothing to worry about. Flick… and half of South London is plunged into darkness. Heart in mouth and a sick feeling probably doesn’t even come close to it.

It took until 7:15pm to fully restore power to everyone — with the London Underground getting electricity back at 6:51pm, and the National Rail being fully restored to power at 6:57pm. 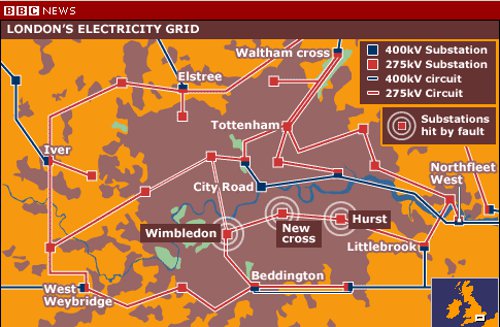 Disruption to rail services however continued after power was restored due to timetables being disrupted and the evacuation of trains.

On the Underground, some 290 trains were in the area affected and lost traction power. Operators coasted towards stations or stopped if they were leaving platforms. 62 trains came to a halt between stations.

Around 1,200 passengers were walked along the tracks to be evacuated from eight of the stuck trains. The remaining 54 trains, including 17,000 people, were moved to platforms as power was restored.

The last train to be evacuated was at 8:20pm, two hours after power loss.

The fire brigade had rescued around 100 people stuck in lifts around London. Also, around 250 sets of traffic lights were affected in south-east London, but power supplies were restored to them fairly quickly.

An investigation into the blackout found that in 2001, the wrong protection relay switch had been installed on the power line that failed. And no one had noticed, which they later attributed to possibly poor documentation not making it totally clear which rating to use for the relay switch.

Basically, they put in a 1 amp fuse when they should have used a 5 amp one.

Exacerbating the problem for the transport network, in 2002, London Underground’s own power station at Lots Road was closed down and the network took its electricity from the National Grid instead.

Although lots of shrill voices leapt to blame that decision, a report by the GLA noted that “the former alternate Lots Road facility to back up London Underground power had failed 14 times in the same period that the National Grid has failed twice.”

A separate TfL report said that the Underground had four separate feeds from the National Grid to ensure resilience, but on the night in question, one of the four feeds was reliant on just one transformer instead of the two usually expected. Quite what if any impact that had is not really clear from the report, although that it is mentioned is suggestive.

The London Underground report generally found that while the evacuation procedures worked well, there was a serious break-down in communications, and the restart procedures to get the lines running again were inadequate.

Getting information to passengers — and the outside media, was also criticized. In today’s more connected society, it’s not just that TfL would probably be better at using social media to get information out — but that same social media can amplify lies and rumours.

One of the curious side-effects of the Olympics is that TfL is probably better placed than ever before now to be able to “flood” social media with coordinated messages during a crisis.

Could such a network failure occur today?

Well, never say never. No matter how much you spend on something, and how many backups you have, failure can never be ruled out.

In that situation, it’s less about preventing the problem, than knowing how to deal with it that matters more. 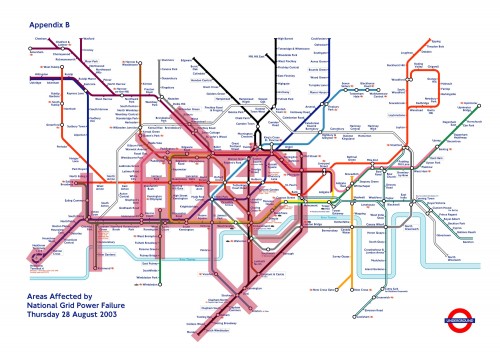 Pubs did quite well out of it though — with lots of affected people choosing to sit it out. Your correspondent however recalls spending the evening on a series of exceptionally slow moving buses heading into darkest South London where he lived at the time.