130th anniversary of the closure of Tower of London tube station

On this day, 130 years ago, the Tower of London station on the London Underground closed. No, not the one we know today, nor that other one you are thinking of. It’s in fact the original of the three that closed — a mere two years after it had opened, which probably makes it the shortest lived tube station in the Underground’s history.

Opened in 1882, the Tower of London station was built by the Metropolitan Railway and opened roughly where the current station of a similar name stands, but thanks to the arrival of the Circle Line in 1884, the station was replaced by another one just a few yards away.

Nearly called Seething Lane, it actually opened as Mark Lane, and was to be later renamed as Tower Hill. That station was to serve the local area until 1967 when it closed to be replaced by the modern Tower Hill station.

But back to 1884, the timing of the closure of the original Tower of London station is itself a little curious.

The new Circle line opened on the morning of the 6th October 1884[1], with both the old Tower station and its replacement Mark Lane station open at the same time.

It was the following week, on the 12th October that Tower of London station closed.

Quite why the old station didn’t close as the new one opened is a bit of a mystery, but I can probably be laid at the animosity between the Metropolitan line and its rival the District line, who had been forced into an uncomfortable sharing of services to form the Circle line.

Anyway, whatever the reason, for one week, passengers could alight at stations that were just yards from each other.

They had to be careful to buy the correct ticket though — for the clockwise route was marked as O — for outer, and the anti-clockwise was I for inner. Buy an O ticket at Mark’s Lane to get a few yards to Tower of London, and you had to go all the way round the circle. You couldn’t hop one stop on the I side of the tracks.

The old station site once closed saw the platforms removed in 1903[2], and served a new purpose though, as in 1936, a new electricity sub-station was built into part of the station. This is actually interesting as back in 1882 when the station was built, it destroyed[3] some 73 feet of Roman wall[4]. The destruction did uncover some worthwhile roman carvings, including an tombstone erected by the wife of Fabius Aplinus Classicianus[5], who had been sent to Britain as Procurator in AD62. 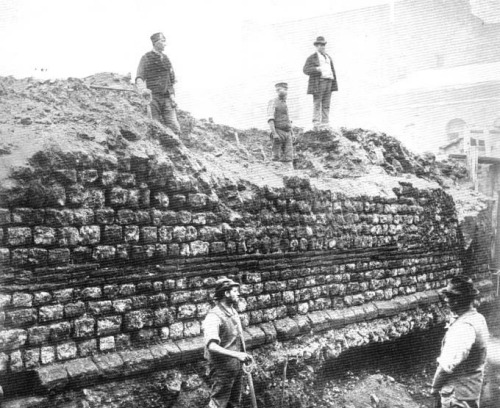 Demolition of Roman wall in 1882

That stone was given to the British Museum, but a replica was installed in the wall of the electricity sub-station[6].

It may still be there, the sub-station certainly is — next to the old University building. 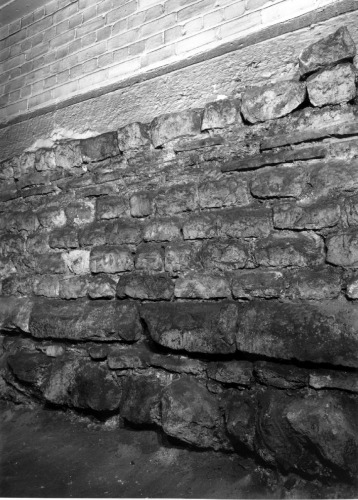 Roman wall remains inside the substation

A few years later, the remains of the original Tower of London station were themselves demolished. The station had been constructed from wood, and its removal in August 1940 opened up a view of the remaining sections of London Wall, which are still visible today.

The replacement station, Mark Lane served the Tower of London area until September 1946, when it was renamed as Tower Hill. Then in a curious twist, the site of the original Tower of London station was redeveloped to build the current Tower Hill station.

That new Tower Hill station opened on 4th February 1967, and the old Mark Lane site closed. But echoes of that old station still remain to be seen.

If you were to look out of the train when heading eastwards, you can see the remains of the station platform at Mark Lane. Although most of it has been removed now and is used for storage — the gap it left is clearly noticable.

Also below ground, but accessed from the street level is the subway — which includes the two entrances down to the platforms. 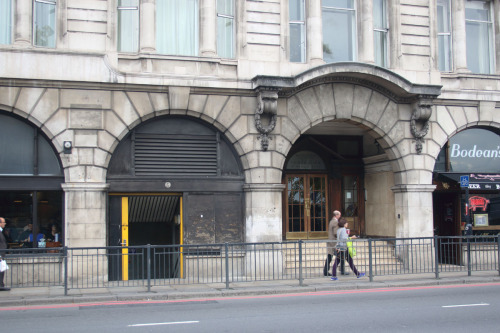 Now permanently sealed, they are useful ventilation shafts, and you can very clearly hear the trains just below as they pass by. 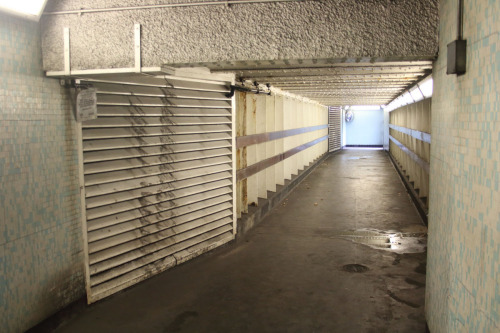 One small plot of land — three different underground stations. Not bad, even by the London Underground’s fragmented history standards.

5] Under another Sky: Journeys in Roman Britain by Charlotte Higgins, page 54