10th Anniversary of The Gherkin

At what point should you mark the 10th anniversary of a building? When construction starts? Or maybe when it is topped out with the last major steelwork? Or the day people first move in? Or — often slightly later — when builders finally move out?

Difficult, but today happens to mark one of several potential “10th anniversaries” of that famous slightly rotund tower at 30 St Mary Axe.

10 years ago today, a ceremony was held to mark the first construction above ground and the lifting of the first of its distinctive triangular shaped steel supports.

Construction had started rather earlier in the year, clearing the site of the former Baltic Exchange, laying the foundations and the basement – but eventually they had a flat ground level surface to work on, and lots of important people turned up to watch a large piece of painted steel set in place, make speeches and generally look rather pleased with the whole thing.

The steel stood out for also being painted white, a covering that none of the other equivalents would get until much later in the construction. 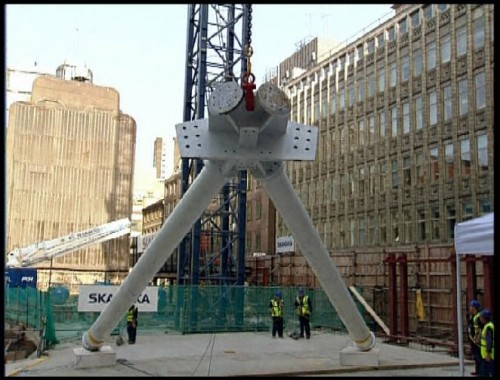 If you’ve never seen it, there is a really rather good documentary DVD available that covers the construction up to the day people move in for the first time, and charts how The Gherkin, initially a term of abuse became slowly a term of endearment, and even fondness.

As a building I like it a lot – but mainly for the details, such as how the glass design spirals around the building, rather than it being a monolithic grey “bombshell”, and detailing at ground level that make it almost perch on the ground daintily instead of flopping all over it. 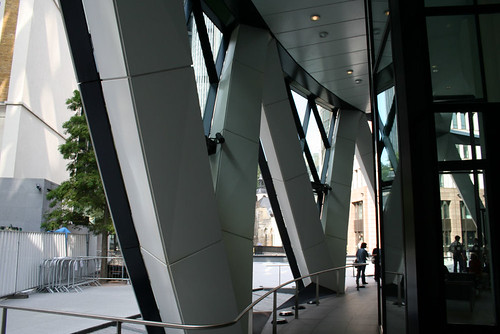 I was also lucky enough to go to the top once when it was open for London Open House, which is actually better than going during an office event as we saw it almost empty of people, so the views and scale of the top floor are more impressive. 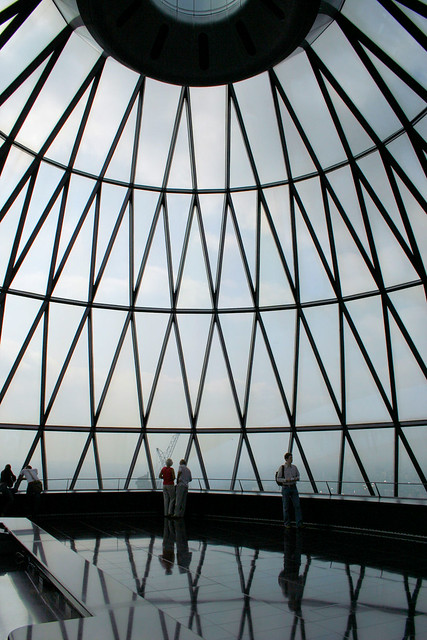 Incidentally, if you go around the back of the building (if a round building can be considered to have a backside), look at the seating/bomb protections and you will see a sign marking the reburial of a presumed Roman princess. Discovered during construction, it’s the first burial in the City of London since they were banned in the 19th century.

What an odd reason to ignore an anniversary.

Does its heritage only start from the date it was bought by the current owners?

The Sky Arts television channel occasionally show a shortened version of the documentary mentioned above, or you can buy a copy from the website. Trailer below:

Having watched the film, all I can add is that I would want Sara Fox to be in my team if I ever built something.

1 Pings/Trackbacks for "10th Anniversary of The Gherkin"