100th anniversary of the first air-raid on London

Today marks the 100th anniversary of the first air-raid over London, by a Zeppelin airship, and probably the first foreign enemy incursion into London for nearly 1,000 years.

In the evening of 31st May 1915, a single Zeppelin (LZ.38) approached London from a great height and began dropping incendiary bombs at random.

It wasn’t targeting a specific building, as that wouldn’t have been possible, but simply to bomb the East End of London. And the ignominious award for the first target to be hit goes to 16 Alkham Road.

That domestic house was the residence of Albert Lovell and his family, and he was able to alert the fire brigade before too much damage was caused. The bomb casing survived, and is now owned by the Imperial War Museum.

The Zeppelin then carried on its air-raid, targeting areas around Shoreditch and Stepney, as it was forbidden to fly further west than the Tower of London. That rule was imposed by Kaiser Wilhelm, who still felt that the war could be won without too much damage to London, and his relatives in Buckingham Palace.

Thus, it was far from central London then that the bombs fell, and on that first raid over London, some 41 properties were damaged, with one cabinet maker in Hoxton being totally gutted by fire.

Mr Henry Good and his wife, Caroline. A coroners report a few days later noted that their burnt bodies were found kneeling by their bed with hands held. As if in prayer.

Elsewhere, other victims included 3-year-old Elsie Leggatt, her 11-year-old sister, Elizabeth May, 8-year-old Samuel Reuben and 16-year-old Leah Lehrman, who died in hospital two days later from her injuries. Her injuries following the raid were described by the Secretary of the Admiralty as “despaired of”.

The seventh and final victim of the raid, Eleanor Willis, 67, died two days later, as a result of shock caused by the raid. An official communiqué from Berlin the following day said that the bombing was “a reprisal for the bombardment of the open town of Ludwigshafen” so the Germans “threw numerous bombs on the wharves and docks of London”.

Although Reuters reported that it wasn’t the residential area that was bombed, but the poison gas factory on the edge of the town. 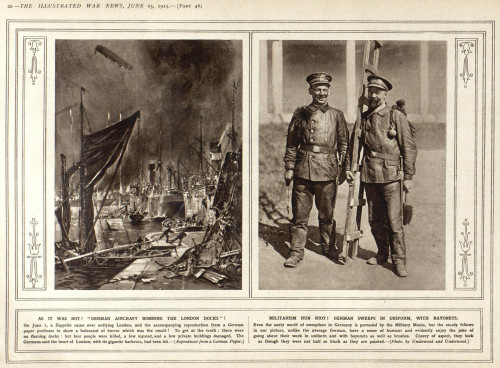 While the air-raid was of historic significance, it also sparked an upsurge in anti-German sentiment, with an angry mob attacking properties occupied by people suspected of being German nationality.

In the case of a shop in Hoxton Road, the occupant fled the property and was chased down the street.

The air raids were also a violation of the Hague Convention’s of 1899 and 1907, which banned the dropping of bombs from balloons. Curiously, that convention is still in force today, but as it doesn’t mention aircraft, bombing by plane is permitted. Just don’t drop a bomb from a balloon.

While the raids were no fun for us Brits, they caused suffering in Germany as well — the Zeppelin gas bags to contain the hydrogen were made from cow intestines, with the result that sausages were banned in Germany to allow for the skins to be used to attack the UK.

We Londoners were being bombed by giant inflated cows!

The raids were also of commercial gain to some. 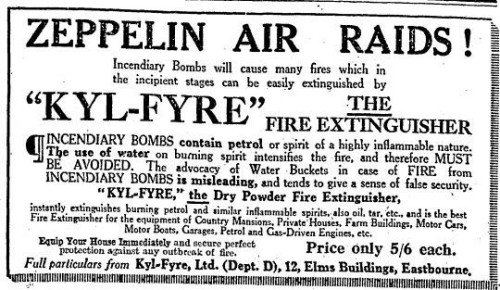 And of the building hit by the very first bomb? To the apparent surprise of the current occupant, the council turned up on Friday to put a plaque on the house.

There will also be an exhibition at the Museum of London until September about the raids.