100 Phantoms to glide through London on Sunday

Specifically, 100 Rolls Royce motor cars will smoothly glide around the posher bits of London on Sunday morning to mark the 100th anniversary of the design of that famous Spirit of Ecstasy mascot that sits on the top of every single one of their cars.

The mascot is actually based on a one-off earlier design mounted on a 1902 Silver Ghost, which was the first to have such a mascot added to it. The idea became popular, and Rolls-Royce later commissioned a mascot to be added to all their cars.

There is quite a fascinating story behind the lady who is believed to have been the model for the mascot design.

Anyhow, to mark the 100th anniversary, 100 Rolls Royce cars will assemble on Sunday morning at Forbes House in Halkin Street (map) near Hyde Park corner, and then from 10:30 will drive in sequence around central London in a loop, then down the A4 towards Syon Park in Chiswick.

Their press office kindly sent me the two following maps of the exact route they will take.

I would presume that Westminster Bridge (with Big Ben* in the background) or Birdcage Walk will offer the best locations for photographers. 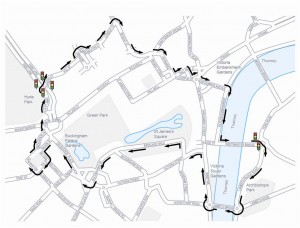